The last couple days have been rainy and windy and I haven’t been able to walk and sketch like I normally do this time of year.  So I thought I’d talk a bit about something new in my sketching life.

It’s called Sketchbook Skool and if you’re part of the social media crowd, you’ve probably heard of it.  Operated by Danny Gregory and Koosje Koene, it’s a school that’s as much about motivation and ideas as it is about teaching techniques.  This is the second session they’ve held and it’s called “Seeing”, with emphasis on how artists see and communicate what they see in their art.  It brings together Liz Steel, Cathy Johnson, Danny Gregory, Brenda Swenson, Andrea Joseph, and Koosje Koene as instructors.

It seemed ideal for me, and comes at an ideal time.  I’ve been very myopic in my approach to sketching thus far.  When I started sketching, 2 1/2 years ago, I couldn’t draw anything.  So I set out with a single goal – to learn to draw something… anything.  I didn’t worry about watercolors, compositions, or any of the myriad of details that one can be involved with in art.  I just wanted to draw stuff.

While I still have a lot to learn about drawing, I’ve gotten to the point where I can make scratches on paper that people at least recognize as the thing I was looking at so it seems to me that now is the time to start thinking of some of those other things that make an artist actually be an artist.  And I think Sketchbook Skool is going to help me in that. 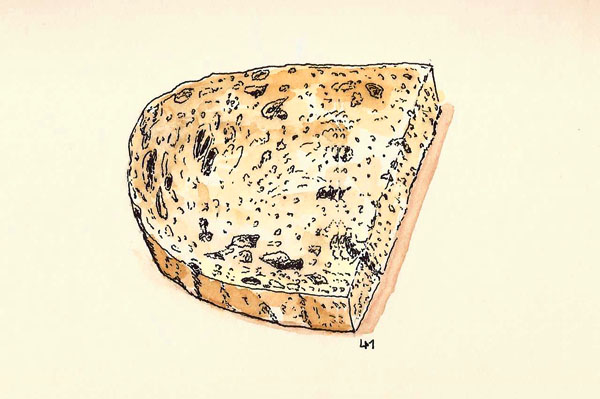 So far we’ve had two assignments from our first teacher, Danny Gregory.  We were to draw a piece of toast, with emphasis on drawing all the details of the surface.   It was an interesting sketch as I nearly went cross-eyed trying to ensure that I got all the little holes and crevices in the right places.  I want to do it again with a small section of grass or some other heavily textured surface.

Our second assignment was an investigation of how we see when drawing quickly vs slowly.  We were supposed to draw something in a minute and then draw right on top of that drawing, but more slowly, trying to do a detailed drawing.  Danny’s example used color for the first, fast rendition and pen for the second, slower version.

I drew our vacuum cleaner using yellow and gray Tombow brush pens.  We were to spend one minute on this.  I then spent 10 minutes drawing the machine using a Pilot Prera.  I really like this idea and hope to do a bunch of them. 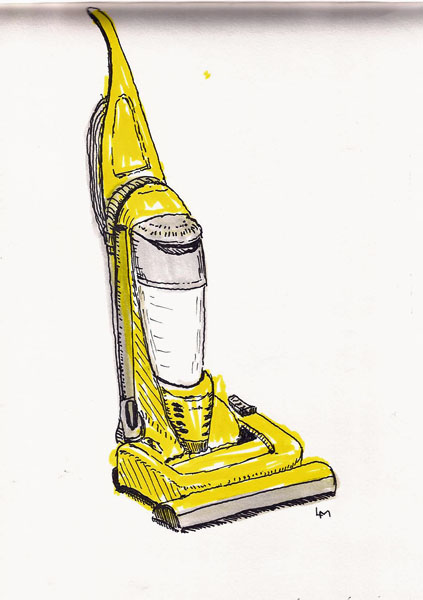 So far, I’m having a ball in Sketchbook Skool.  The video instruction is first class and interactions with other students is providing a bunch of great ideas.  Maybe I will be an artist some day.