We were having some wonderful late summer weather this year but when Quebec decides to head toward winter it does so in rapid fashion.  It seems that even the trees have a hard time keeping up as they try their best to turn bright colors and then lose their leaves.

The year change of seasons has put me into near-frantic mode.  I’m trying to build up my bad leg, having lost much of the muscle mass of my right leg.  That means walking all the time, or at least as much as I can.  Often I do two walks a day and this eats a lot of time but once the snow starts falling, long walks will be out of the question.

At the same time I’m in ‘it’s almost winter’ mode with my sketching.  Happens every year as I realize there are only so many days when I can sketch outdoors.  Honestly, this part of frantic is coming to an end as it’s becoming too cool for this ex-Arizona boy to be outside sitting on a stool.  Museum season will begin soon.

Because of this I’ve been neglecting the blog a bit.  Some of the neglect is because I’ve been doing a lot of experimenting rather than sketching for display.  My garbage can is well-fed, though.  I’ll probably talk about some of that stuff as we drop into winter.  My apologies.

Chantal made a pie the other day and I decided I should paint it.  This was one of those wacky experiments as I’m not much of a watercolorist.  I’d like to be but mostly I just color in the spaces of my ink sketches.  I was happy with my pie experiment though.  The pie was good too. 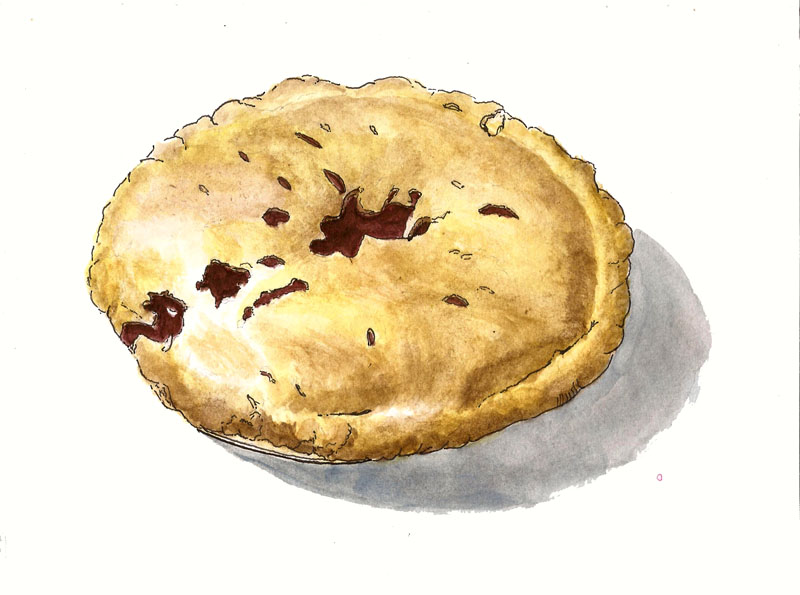 9 Responses to “Rushing Into Winter”