I’m a really lucky guy.  Why?  Because I’ve got a daughter who’s been accepted to the McGill Law program in Montreal.  Who cares, you might ask.  Well I ask you, what better excuse could there be for a certain sketcher to go to Montreal and sketch in the many great sketching locations that exist there.

My first trip took place last week, when my daughter went to an orientation at the law school.  It was a great day.  I emailed (is that a verb yet?) Marc Taro Holmes and asked if he was available.  Good timing and a bit luck found him having the day free for sketching.

We met at the RedPath Museum on the McGill campus and I spent the day attention torn between concentrating on my drawing and talking to Marc and watching him do some amazing watercolors.  For this post I’ll stick with showing you what I drew that day.

This heron and I spent some time together.  He (she?) was beautiful.  I was doing this standing up and when it came to the paint I ran out of hands, which led to things being out of control, and that’s putting it mildly. 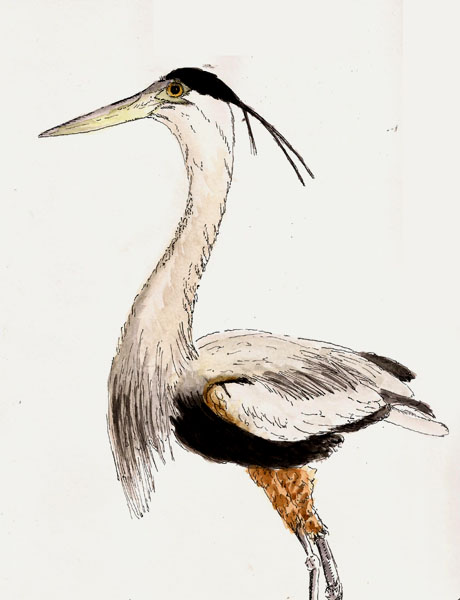 When we finished up in this part of the museum we decided to go upstairs to draw.   The stairwell is filled with a bunch of stuffed animals.  It was a very overcast/rainy day and this part of the museum was pretty dark but I decided to draw the head of a hippopotamus.  As I sat on the steps, I could see the outline well enough but there was considerable guesswork regarding the various undulations on the body of the animal.   It was both frustrating and fun to try to think about how the muscles would run around the head/neck of the animal. 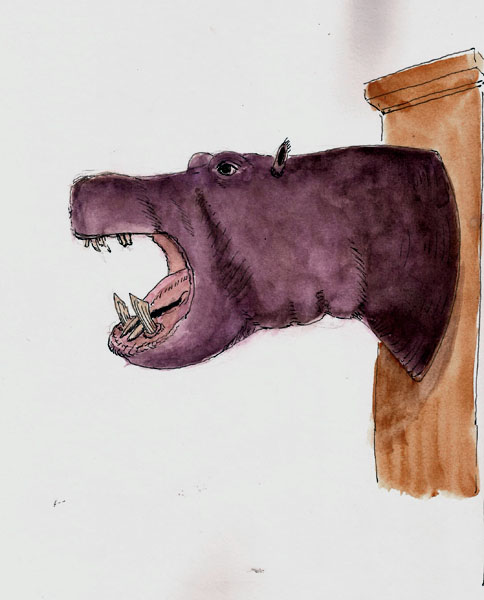 We’d had a long discussion about whether one should use pencil or not.  This internet meme is very popular and I don’t ascribe to it, though I’m very much in favor of leaving the eraser at home.  I’ll probably talk about it at some later date but here I’m only going to say that I decided to do some pen-only drawings.

I was fascinated by this very primitive stringed instrument, formed by a drum-like body with sticks strung through it to raise up the “drum” cover so that a bridge could rest on it to hold the strings.  The neck of the instrument was a long, somewhat rough stick with frets formed by ropes wrapped around it along its length.  I hope I’ve captured it well enough to show these features. 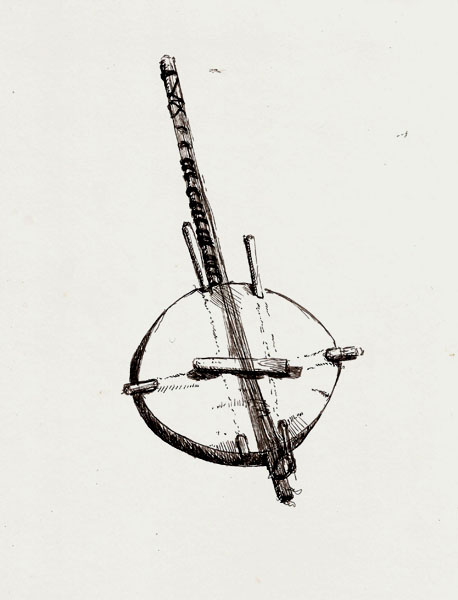 I was getting sort of tired at this point but just to the right of where I was sitting was this clay statue that had a grass skirt and a bunch of feathers on its head.  I quickly sketched it but didn’t completely finish it as time ran out.  I played with some color when I got home but I don’t think it improved it much, if at all. 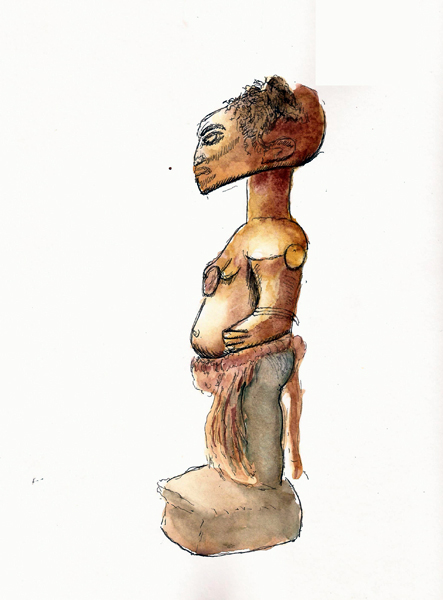 This day was a great day.  Heck, I think any day at the RedPath would be, but it was particularly great because the discussions that Marc and I had were fun and watching him work magic with watercolors was very insightful and inspiring.  Ain’t sketching and the sketching community great?

6 Responses to “Road Trip To The RedPath Museum In Montreal”