When I started sketching I bought a bottle of Noodler’s Black ink.  It was “bulletproof”.  It was “water-resistant.”  Or so sayeth Noodlers.  It was only later that I discovered that fountain pen people have different definitions of waterproof than I have.  In fairness, the definition is based upon performance on papers with little sizing and fountain pen users are more concerned with signatures not disappearing in the rain than they are about a bit of the ink muddying a watercolor wash.

But I generally work on paper that is sized to accept watercolors and the result is that a light-color wash and Noodler’s Black don’t go together.  Quickly, I came to understand why so many sketchers use Noodler’s Lexington Gray, which is a very dark gray ink that seems more “bulletproof” than Noodler’s Black.  Lex Gray has been my ink of choice for a couple years. 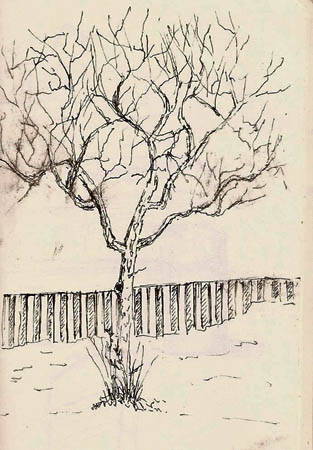 But I decided to revisit Noodler’s Black so I filled a Pilot Prera with it and took it sketching.  It was far too cold today to be out sketching, mostly because of a brisk wind that accompanied the 44F temperature.  My first attempt with the ink was made in my cheap sketchbook (best case scenario for Noodler’s Black).  Unfortunately, I’d also forgotten that Noodlers Black takes longer to dry than Lex Gray, particularly when it’s cold.  As you can see, the sketch is smudged badly.  Oh well, it was fun trying to capture this small crab apple tree.

After I did this sketch I walked a bit, trying to warm up before plunking myself down in front of a building to give the ink another try.

While no fault of Noodler’s Black, I had to do this sketch more quickly than I would normally do it as it was just too cold to sit there more than a short time but, frankly, I became pretty frustrated long before I finished.  I was experiencing more smudging of the ink which resulted in attempts to fix (cover up?) smudges, which made it worse, which caused more attempts to fix it, etc., etc.  Anyone who has sketched for a while knows that drill.  The results are never pretty.  This sketch was done on Stillman & Birn Alpha paper, which is more heavily sized than my dollar store notepad. 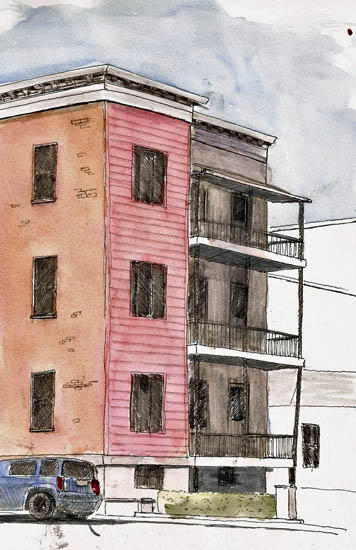 The real ‘test’, however, came when I got home and attempted to put relatively light color on top of the sketch.  As you can see, everything is dull and muddy, largely because the ink washed out into the color.  When I was finished I emptied the pen and filled it with Platinum Carbon Black.  Noodler’s Black is not an ink I’ll be revisiting again… ever.