This past weekend was rainy and windy, so my hopes of outdoor sketching were dashed…or dampened…or blown away.  It depends on your view.  And when it’s a gloomy, rainy day, a philosopher sits on a rock and ponders the universe. A sketcher draws the rock. Stillman & Birn Alpha (4×6), TWSBI Mini with Lex Gray. 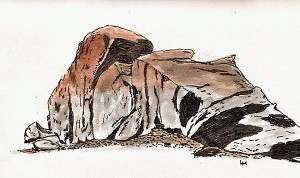 Sunday was the same – rain and wind. No outdoor sketching today either. So there I was, watching the Bluejays on TV. Since I can’t watch TV without doing something else I started flipping through photos I’ve taken around Quebec and found a photo of Quebec’s “cannonball tree.” This is something that would be hard to sketch on site because, in the winter, it’s covered with snow and in the summer, it’s surrounded by groups of tourists taking photos of it.

Back in the 18th Century the Brits came along and decided they like this “Nouvelle France” place, so they started lobbing cannon shells on the city…I’m sure in an attempt to make it look more British. In any case, they did that for several months, ultimately got the French to surrender, and we’ve all lived happily every after ever since. 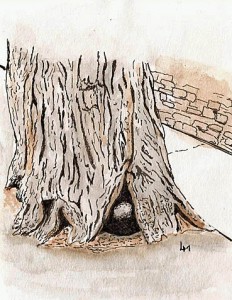 But somehow, this French tree grabbed a British cannonball and hung onto it, for a couple hundred years. It seems reluctant to give it back and so so the tree has become famous for its persistence, appearing on tourist guide maps of things to see. My sketch is in a Stillman & Birn Alpha (4×6) and I used my TWSBI Mini with Lex Gray ink.

Will the rain ever end?