April 19th was the date of the 43rd Worldwide Sketchcrawl.  Selecting an appropriate location for this spring event is tough for us in Quebec City because we typically have to wear heavy coats and learn to shiver.  This year has been particularly bad in that regard so we decided that holding the sketchcrawl at the Quebec Aquarium, where we’d have the option of indoor or outdoor sketching, was a good idea.  As it turned out, it was.

While I announced the beginning of the outdoor sketching season in my last blog post, it was too cold for me to want to sketch outdoors at the sketchcrawl, though a few of the participants braved the cold to sketch the walruses and seals that were in outdoor enclosures.  I found the nice warm buildings to be the place I wanted to be.

One thing we didn’t count on were the crowds.  It was Easter weekend and there were hundreds of people at the aquarium, having come from Montreal and elsewhere because of the long weekend.  This made it hard to get access to the exhibits and you had to like lots of kids looking over your shoulder while you sketched.  I always like that but admit that the crowds made the day a bit stressful.

Our aquarium, however, is wonderful.  Not only does it have the typical fish swimming behind glass but there is a multi-story HUGE aquarium with fish who pose for sketchers.  I think I’m going to get an annual membership so I can go back when it’s warmer (lots of outdoor sketching opportunities) and where I can go during the week to sketch a lot of the inhabitants.

I started the day by sketching a surgeon fish and leopard shark.  I wish they were better but they were fun to do.  Stillman & Birn Alpha sketchbook, Pilot Prera and Lex Gray ink. 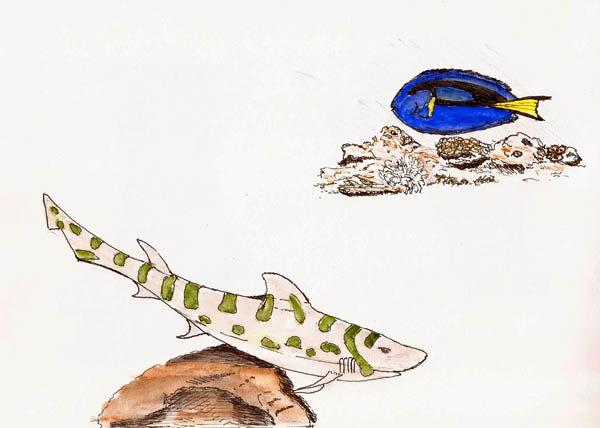 I spent a lot of the morning just looking as I hadn’t been to the aquarium for many years.  That was probably a mistake as the crowds started to build about the time I was ready for lunch.  After lunch it was near impossible to sketch leisurely.

But lunch time it was and while eating I had a great view of rocks, trees and a trail that went by the large window I was sitting next to.  Once my face was fed I sketched the rocks, creating this vignette. 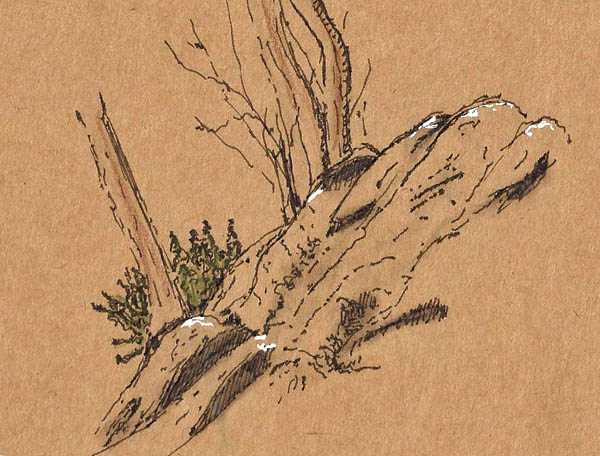 A couple of us found a spot on the upper floor of the large aquarium and we tried to sketch the fish as they cruised by in front of us.  I found it a bit difficult but lots of fun.  What kind of sketching isn’t fun?  It was a fun end to a great day. 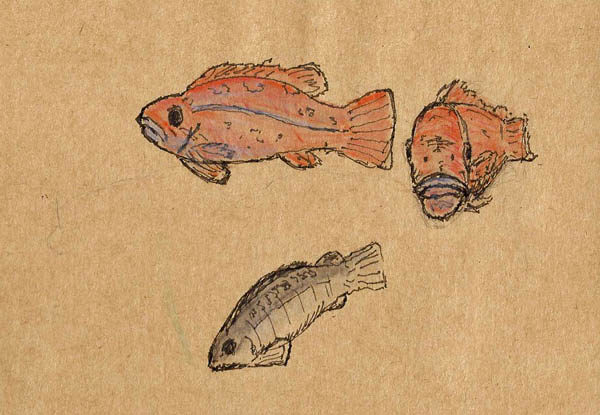