The short story that everyone is taught about how Quebec City went from being a French colony to one in which the British were in charge goes something like this:

Battle on the Plains of Abraham
The Brits sailed up the St. Lawrence and spent some months lobbing cannon balls at Quebec City.  The French lobbed some back.  Then the British climbed the cliffs to the Plains of Abraham, where General Wolfe and General Montcalm pointed their respective troops at one another and after a short battle, the British prevailed and both Wolfe and Montcalm were killed.

There is truth to that story but so is “The Roadrunner ran fast and Wile E. Coyote got an anvil on his head.”  There’s just more to it than that.  In point of fact, there were battles up and down the St. Lawrence and Wolfe and Montcalm’s troops had more than one encounter.

What does any of this have to do with sketching?  Well, Le Collectif  arranged a sketching adventure to Maison Vezina, a beautiful house and historic site that sits on the east side of Montmorency Falls, a huge waterfall that is fed by the Montmorency River and which dumps into the St. Lawrence.

This house is fully renovated and was home to the Vezina family for much of its existence.  But prior to that this area was one of the encampments of General Wolfe.  Back then, the buildings were a bit more spartan but neverthess, they indicate the longer-term nature of the battles for Quebec.  Wolfe had built a fort, complete with dry moat as well as several buildings on this high perch above the St. Lawrence.  From there he could see the French troops on the other side of Montmorency Falls and had a good view of Quebec City itself.  It’s likely that he could also see his ships and encampments on the south side of the St. Lawrence.  It was an ideal place if you were a British general.

There are many things to draw in this area but I settled on the more mundane, the main doorway into Maison Vezina.  I just liked the rocking chair on the porch. 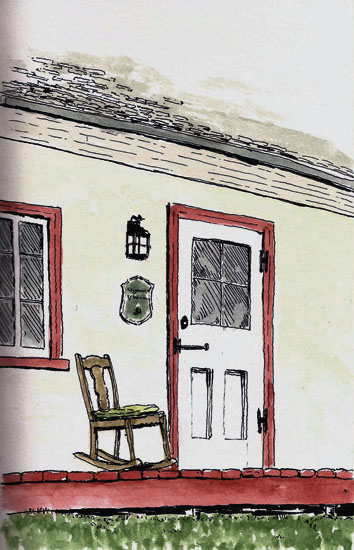