In my last blog post I admitted that I often commit the deadly sin of using a pencil in advance of my fountain pens.  This is a sometimes I do, sometimes I don’t thing but I suggested that there are two ways/reasons why I use a pencil.  In that post I showed one of those reasons, where I simply drew some blobs to give me some indication of the location of the various objects tht make up a scene.  The reason is that by doing this I can draw any of the objects while knowing how it relates to the other objects as the preliminary pencil work, that represent my thinking about those relationships, has already been done.

The other reason that causes me to do some basic pencil work before moving on to ink arises when I draw man-made objects, like buildings, cars, etc.  I could just start drawing, of course, but I prefer to analyze these objects separate from the actual drawing.  I want to spend time ‘seeing’ the relative sizes, locations and orientations and I want to do it with a higher level of precision than the example in the previous blog post. 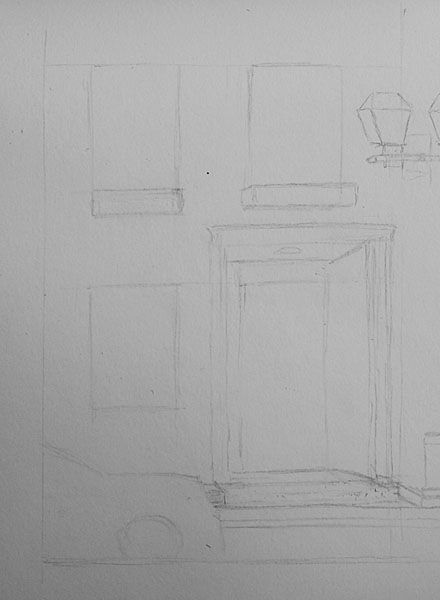 Take a look at this preliminary pencil sketch.  You’ll notice that there is no detail.  It’s mostly about boxes but those boxes represent the windows and door of the building.  While drawing those boxes I paid close attention to their relative alignment and sizes.  I didn’t fuss over whether the lines were straight or the corners square as I was more interested in whether the two windows on the left were the same size (the third window is different) and to ensure that the windows would be lined up with one another when I drew them.  Notice that I also drew a few lines to represent the front of a car.  Here I was only interested in the windshield and hood angles, where the car sat relative to the bottom left window, and where the curb line met the front of the car.

Is this necessary?  Of course not.  In fact, Marc Taro Holmes just did a great blog post on using ink dots to organize a drawing.  I’ve used that method myself.  Still do.  But by using a pencil,  I end up with boxes that I can look at, compare to the building I was sketching, and, for me, it provides better visualization of how the sketch will look when finished.

Regardless of how you do it, the important thing, I think is that you do this sort of organizational step before you start your actual drawing.  Too many sketches are less than they could be simply because the drawing step was started too soon, leaving the sketcher to discover, major misalignments, a lack of space for a particular object, and other dilemmas that are easily avoided.

Another advantage of pencil use it that a pencil is a tool separate from my actual drawing tool.  By using it, it’s easier for my feeble brain to understand that I’m ‘organizing’, and not ‘drawing.’  It causes me to take the time to actually see the organization of my subject and causes me to organize it on the page.  Often, if I work directly with pen, I’m inclined to skip this step or rush through it too quickly.  Give it a try.  It might work for you in the same way.

In any case, here’s the result after I add ink.  Once again, the pencil lines are so light (I increased the contrast for the post) that there was no need for an eraser of any kind. 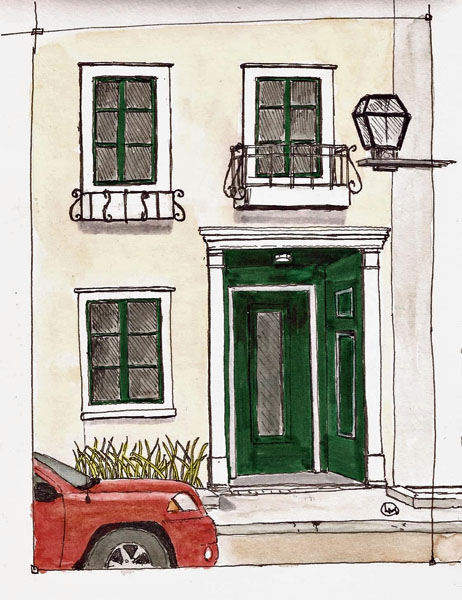 2 Responses to “Pencil Before Ink: Another Approach”