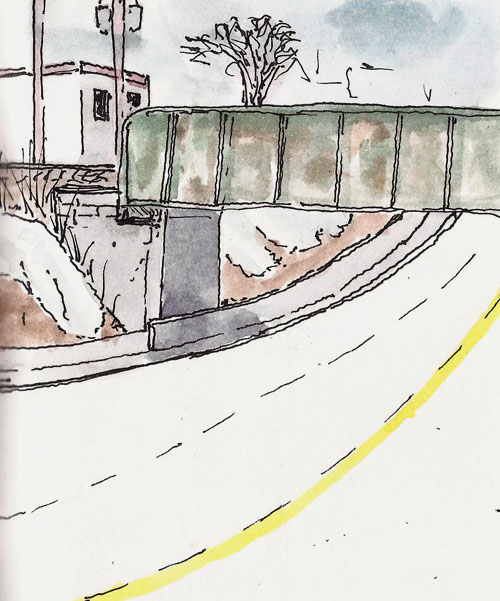 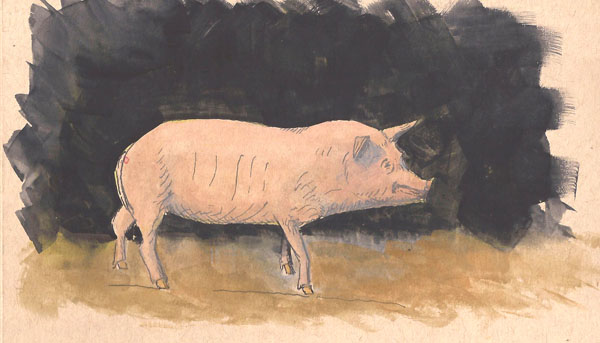 I’ve mentioned that I’m starting to work with gouache and have posted a couple small results of those activities.  I’ve also filled a garbage can with paper covered in various sized spots of gouache as I’ve tried understand gouache-water ratios, how to lighten colors with white, and the rest.  I really hate doing that stuff.  I guess I’m just not cut out to be a color spot maker.

The other day I was drawing, in my typical pen and ink style, a small steam locomotive.  I was enjoying myself when my brain went off dreaming.  It started thinking about painting that locomotive in gouache.  They say that if you’re going to dream, dream big and this was a whopper.

But I did it anyway.  I’ve never painted anything complex without a proper drawing.  I have painted a couple simple buildings though so how hard could it be?  In short, I was delusional.

I decided to leave my pen and ink drawing alone and made a big beginner mistake.  I thought, “I’m just learning so I don’t need to use good materials.”  I got out a piece of cardstock, drew the main boxes and cylinders of the locomotive and, with a thin layer of Payne’s Gray gouache, drew in the shape of the locomotive… sort of.

Once I had an overall light gray locomotive, I corrected, to the degree that I could, the shape and proportions of the object.  Truthfully, this wasn’t very successful until I started using slightly thicker, darker paint as I brought more form to the boxes and cylinders.  This took me about an hour less than forever because I added and removed paint numerous times.  The paper didn’t help much as the cardstock buckled and seemed to instantly dry the paint.  Next time I’ll take my advise to others and use decent watercolor paper.  Anyways, here’s the result.  It’s a long way from good but I’m pretty happy with it. 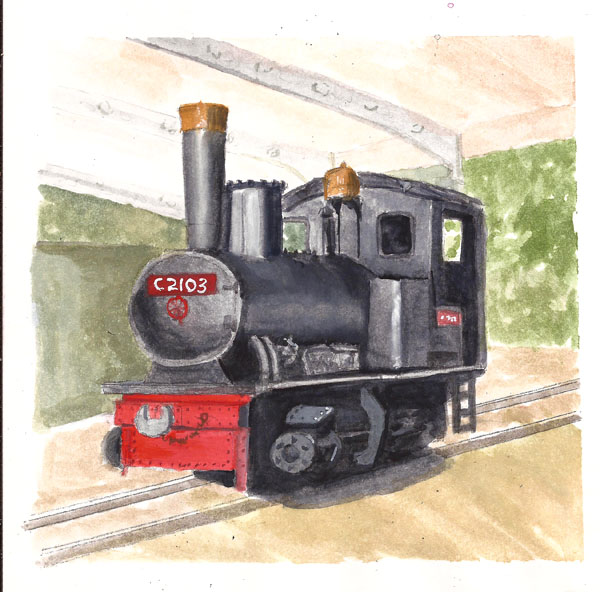 James Gurney asked this question in a recent blog post.  He was talking to people who make a living doing art but it made me realize that COVID-19 is affecting a lot of us these days so I thought I’d talk a bit about what it’s done to my way of making art.

Quebec was very proactive in responding to the pandemic and so we got shut down pretty much the same time as the professional sports closed their doors.  So we’ve been spending a lot of time at home.  We did make one whirlwind trip to Montreal to retrieve our daughter because we didn’t want her to spend months living alone in a one-bedroom apartment.

Now I confess that before the virus came along I was dealing with winter and already trying to teach myself that drawing at home wasn’t a crime, though without much success.  Still, I’d drawn a bunch of stuff around the house.  But I started to get serious about this when I realized that I wasn’t going to be able to go out sketching when the snow melted.

Here’s me, in my studio before the pandemic: 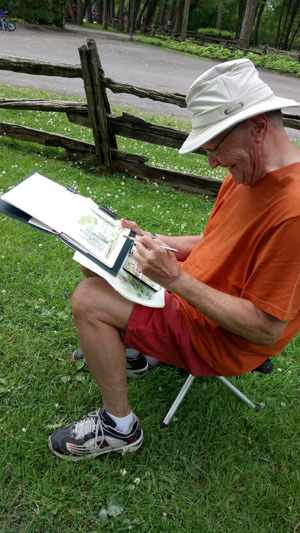 Ah, the good old days.  Will they ever return?

Here’s where I spend my time these days: 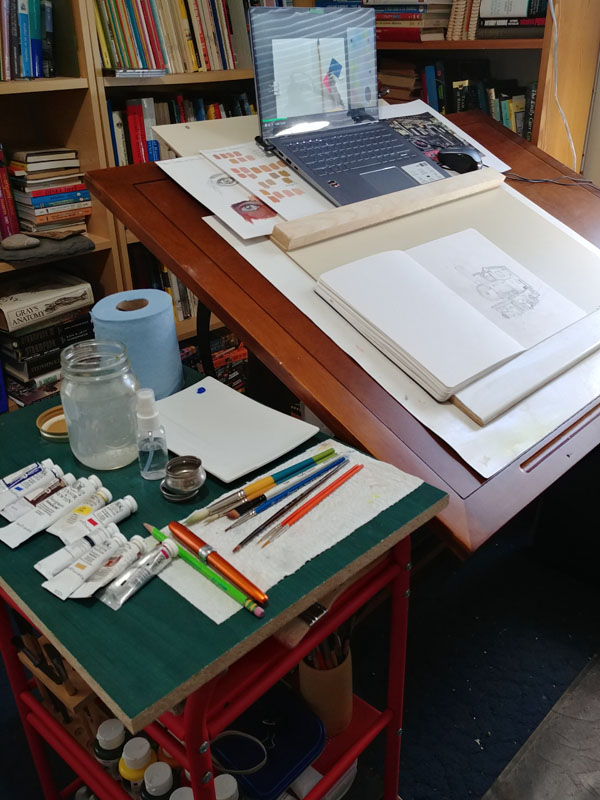 I built the little gizmo to hold my laptop above my drawing surface because I signed up for Skillshare and I’m watching some courses, mostly making different kinds of marks and color blotches in an attempt to learn how to wield a brush.  Not as much fun as sketching on location but fun nevertheless.

Not wanting to do a post without some art, here’s one of a bunch of floating head sketches I’ve done from Mr. Google people.  What are you doing to while away the time.  Remember when we wished we had more time to draw?  Maybe now is that time, though I’m distracted a lot by the news right now.  Stay safe everyone. 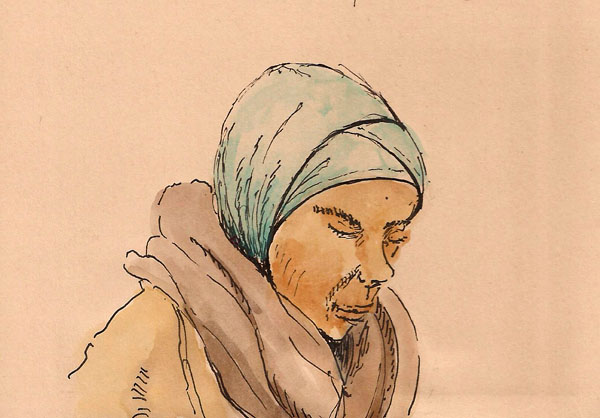 I’m continuing my experiments with gouache, trying to figure out how to use it effectively.  I’m also learning how many basic concepts of painting I don’t know at all.  Giving up my fountain pen approach to capturing objects makes me feel lost.  But I feel (unsure?) that I’m learning those concepts more quickly than if I’d stuck with a pen/ink/wash approach.  In the end I think my gouache experiments will improve my pen and ink drawing and certainly my watercolors.

When I posted a lemon portrait recently, my first real gouache painting, I said that “gouache is not opaque watercolor.”  A couple people took me to task about this statement and I should have clarified what I meant and what my motivation was for saying it.  The motivation came from the many watercolorists who have said (on the internet) that they tried gouache and had trouble and the fact that I got the same problems

If you want to paint opaquely, however, you need to approach gouache more like oil painters do (I have never done oil paintingl but I’ve watched some on YouTube :-).  They don’t lighten tones by adding solvent.  They use it to control viscosity.  They mix colors to lighten/darken tones.  They also work in layers that start thin (lean) and move to thicker layers (fat).  We sort of do the same with watercolors because we use a “tea, milk, honey” approach.  So, using water to control viscosity and color mixing for tone allows the use of gouache as an opaque medium  Anyways, that’s what I was talking about.  I make no claims to knowledge of anything so if you disagree, that’s fine.  You’re probably right (grin).

When I do gouache I sometimes wonder whether I’m learning, floundering or just creating personal embarassment.  I am having fun, however, and with the current state of things, that’s enough.

I went off the deep end the other day and did a simple landscape painting in gouache.  There was no under drawing.  There was no planning.  And most of all, there was nothing to look at because we’re buried in snow here in Quebec.  I NEVER DO STUFF like that.  Maybe it’s the cold I have or maybe it’s the “self-isolation” and “social distancing” I’m doing but I did it and here is the result.

I also wanted to work on my ability to manipulate gouache to render an object so I painted this soup cup using only burnt umber and titanium white.  I sort of messed up the top rim of the cup but, as I said, there’s a certain amount of embarrassment that goes along with trying new things. 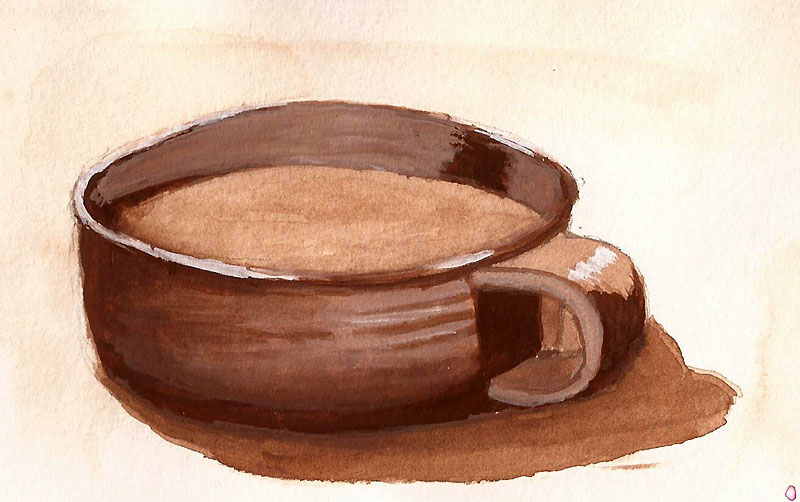 Hope all of you are safe and have settled into your own self-isolation.  At least we can draw.

For many one result of COVID isolation has been housing reorganization and behavioral adjustment.  Some households have seniors who have been moved home by the kids while others have adjusted their family situation by having kids move home with us seniors.  Pro and con, adjustment is the best descriptor of what we all must do […] Read more »

I’ve mentioned before that I’ve been doing a lot of doodling, trying ideas and approaches.  I’ve also mentioned that most of these “great works” have found their way to the garbage can, mostly because I’ve been grabbing any old piece of paper on which to doodle. In explaining my process I started to feel silly […] Read more »