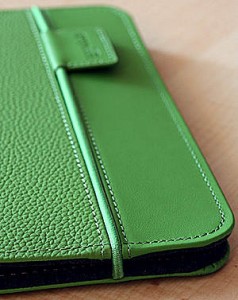 I have a friend who has an ability that I very much envy.  She is able to quote poetry on virtually any subject.  I’m always a bit awestruck when she does it.  I’m also ashamed at my level of ignorance in this area as other than rose are red, violets are blue kinds of poetry, I know little of the literary form. 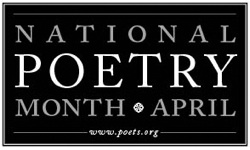 April is Poetry Month.  Established by the Academy of American Poets in 1996, it’s been celebrated every year since.  I’ve decided to celebrate with them, and possibly do something about my ignorance.  I’ve just signed up for their “Poem-a-Day” program and will certainly be the better for it.

I live in the frozen north – in Quebec.  But my favorite place to shop for pens and paper is in Virginia.  If not for the Internet, it would be a long walk.  The place is Goulet Pens. 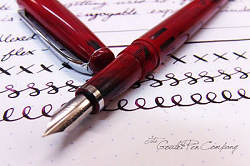 They stock my favorite Rhodia and Clairfontaine journals and notepads.  They stock a wide array of fountain pens, though mostly those that are reasonably priced.  Oh…and the array of inks they sell is to die for.  I sometimes play with their “Swab Shop” which is an online facility that lets me compare colors of all of their inks even though I tell myself I don’t need any new ink.  It’s just fun.  And, of course, one can never have too many inks.

But it’s not their products that excite me about Goulet Pens. It’s Rachel and Brian Goulet and their approach to business.  They’re not just selling pens and paper.  They LOVE pens and paper and they LOVE their customers.  Well, maybe that last thing is a bit strong but they sure act like they like them.

Each week they conduct “Write Time”, which is a live-streamed video and associated chat room. They discuss new products, answer questions, and laugh and joke with their customers.  It’s a hoot.

Brian and Rachel also produce a great blog called Ink Nouveau where they provide a lot of great information about fountain pens, and the various paper products they sell.  They have a YouTube channel where you can access a growing catalog of videos (currently 87 of them), and each provides valuable information about paper and pen products, tricks for maintaining and improving pens, etc.  In short, they work hard for their customers and regularly bring a couple of bright-eyed smiles to our computer screens.  We all smile back. 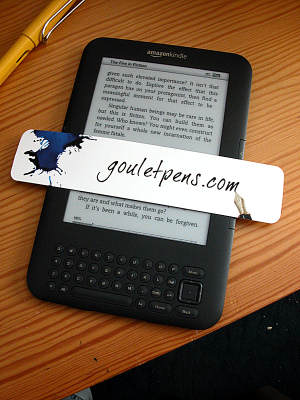 I’m having one small problem with one of their products, though.  I just received an order and they included a freebie.  It was one of their new Goulet Pens bookmarks.  Just the thing, they say, for marking your place in a book.  I guess it works ok but I’m having trouble getting used to using it.

I thought my first post should be one that states the website goals.  Long ago, I created my first website, shortly after Mosaic came into being.  There was no Netscape, Explorer or Firefox.  Google didn’t exist.  Blogs, Twitter, nor Facebook had been invented.

At the time I was a scientist.  I wrote constantly, in science fashion, but I needed more, so I wrote on the new creation called the world wide web.  Nobody really read that website as the notion of surfing the web was unknown to most at the time.  That never bothered me much.  I wrote because I felt the need.

Since then I left science.  I’ve spent time as editor-in-chief of a couple magazines.  I’ve written monthly columns for several magazines and I’ve written feature articles for others.  I even wrote marketing materials for a couple businesses.  The only common thread throughout was words, strung together to form thoughts.

I love words, and I love the various ways of putting them in an order that makes sense.  While I’m a long-time computer geek, I’m also a fountain pen afficionado and I spend far too much time pondering the wide array of journals and notebooks available today.  So while I have an ongoing love affair with my laptop, I often put pen to paper.  A couple of years ago I recycled a small mountain’s worth of notebooks that I’d used but here’s a photo of the notebooks I’ve accumulated since in the past two years.  It’s a sickness but a very pleasant one. 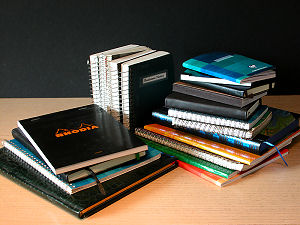 This website will reflect these preferences.  I will talk about my trials and tribulations as an author, views on the industry, and my thoughts on the writing process itself.  But I’ll also talk about my passion for pens and paper.   Some say it’s old-fashioned to write with pen and paper.  I find doing so is inexorably linked to my success as an author, regardless of what I’m writing.

I do hope you’ll follow along and provide your own insights by leaving comments.  Do you use notebooks in support of your writing?  How do they help you?

I’m hoping this blog is finally working again.  I think my blog got COVID or something because several things broke all at once.  People could access what was there (I think), but I couldn’t post.  I think I’ve gotten things straightened out. Our “spring” took about two days and we went from frost warnings and […] Read more »

For many one result of COVID isolation has been housing reorganization and behavioral adjustment.  Some households have seniors who have been moved home by the kids while others have adjusted their family situation by having kids move home with us seniors.  Pro and con, adjustment is the best descriptor of what we all must do […] Read more »