I’ve been following Marc Taro Holmes’ new Craftsy course and as a result of that I’ve been doing a lot of his ‘single-line drawing’ sketches.  This is an exercise with two purposes – to get your hand to loosen up and to simplify what you are drawing.  It’s like doing push ups so you can hit a baseball.  It’s not the way to do most drawings.  It’s also not the equivalent of a blind contour drawing as you’re looking at what you’re drawing. 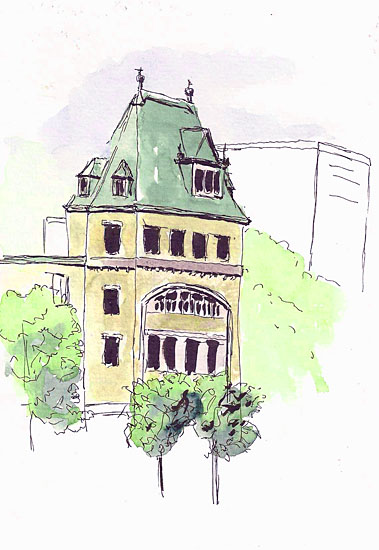 It’s taking me a while to get so I could do it, and I’m far from doing it well, but this exercise is really opening doors for me.  I struggle with the fact that my typical “style” is rather tight and SLOW.  Sometimes I want to capture something without spending a lot of time.  Sometimes I want to capture a LOT, and don’t have the time given my style.  So developing an alternative is useful to me.  Note that I didn’t say replacement.

Anyways, I’m starting to try to bring some of that more loose, quicker approach into my sketching and here’s an example.  Not a single-line drawing by any means but one done more loosely and more quickly than is my norm.  New adventures.

It was done on the same 6×9 sheets of cheap watercolor paper that I’ve been using for my single-line exercises.  BTW, Marc’s course is spectacular, providing more bang for the buck than most courses.  I highly recommend it.

2 Responses to “Not Quick Sketching, But Quicker Sketching”