Anyone who is a parent has faced the uncertainty of responding to a young child’s beaming face as she looks up, waving a paper in the air and says, “Mommy, look what I made.”  The parent looks at the blob of color on the paper.  They note a roundish form, drawn in gray, four projections and some scribbles on top where a head might be.  Is it an elephant?  A cat?  Or is it me?  Only parents can properly negotiate that mine field.

And so it goes with sketchers, but with less delicacy I’m afraid.  When I brought my latest sketch home my Quebecois wife said, as she always does, “C’est beau,” but this time with puzzlement on her face.  Then, something she would never do when our daughter was growing up she blurted, “What the heck is it?”

My daughter came into the room, looked at the sketch and said, without any fanfare, “What is that thing?”  Obviously she has learned nothing from the finesse with which we greeted vague forms made from little hands with the best that Crayola had to offer.

In this case, however, maybe I can forgive them.  It’s not something you see every day – or ever for that matter.  We don’t make stuff this elegant anymore.  But back at the turn of the 19th Century, those promoting the idea of subways felt the need to make them look spectacular because, for most people, the thought of going underground was, well, creepy.  This cast iron beauty is an entry gate from the 1900 Paris subway.

The sketch was done at the Musée de la Civilisation museum, in the Paris exhibit.  Eighty-six of these gates were made.  I’d hate to have to draw all of them.  One was enough to generate smoke from my ears. 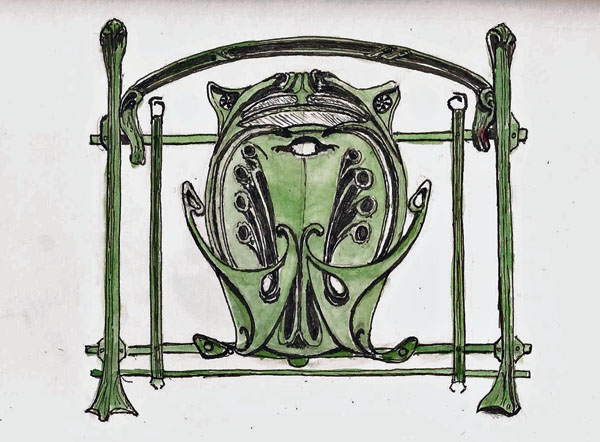 4 Responses to “Never Ask A Sketcher What Is It?”