Have you ever had a dream for a long time and then, when the dream is realized, things aren’t what you dreamed them to be?  That’s just happened to me.  Ever since I started sketching I’ve dreamed of owning a Namiki Falcon.  Now I do, but now it’s called a Pilot Falcon.  So much for dreams (grin). 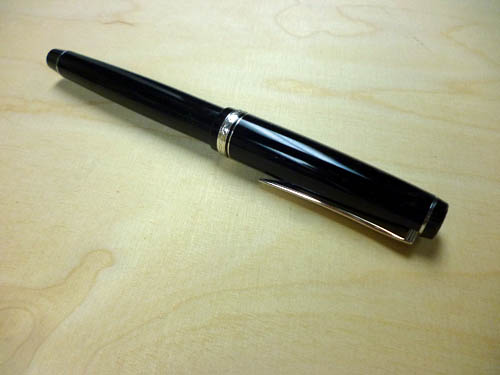 This is not a review of the Falcon.  There are plenty of those, a very good one is by Brian Goulet of Goulet Pens but there are others on YouTube.  This is also not a post where I’m going to show you a lot of sketches I’ve done with this pen.  I’ve already shown you several here and here.  This is a more simple view of the pen – a sketcher’s view.  Most fountain pen reviews are about how it writes, not how it draws. 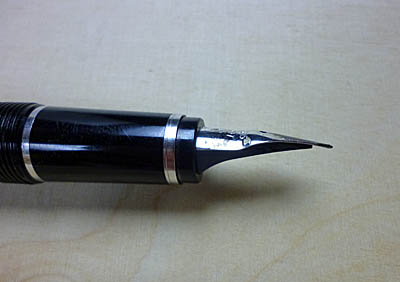 Let me start with why it’s taken so long for me to get one of these pens.  There are two reasons.  First is that it’s not an inexpensive pen.  The street price is $140-150USD.  Tack on some shipping and the investment is significant.  The second reason is that, until recently, you could not get this pen with an extra-fine nib.  The Pilot Falcon is a flex nib pen and I wanted a pen that would provide very thin lines as well as thicker, more ‘normal’ lines.  The extra-fine Falcon provides this.

Now, to that “sketcher’s view.”  People who evaluate pens for writing generally look at extra fine nibs and react with ‘it’s scratchy’, because their fine tips tend to be during the upstroke while writing cursively.  The Pilot Falcon is no different in regard.  BUT, this is not a problem when drawing as most of our strokes are either descending or lateral. 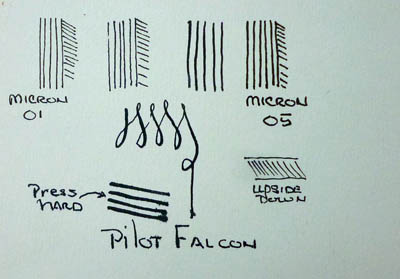 And, in the spirit of a ‘sketcher’s view’, here is a comparison of the lines you get from this pen compared to something you might know, the Sakura Micron 01 and 05.  This is why I’m thrilled with this pen.  This test was done with Platinum Carbon Black on Fabriano Artistico watercolor paper (cold-pressed).  It borders on being too bumpy for fine nib fountain pens.

A couple secondary things I like about this pen.  The first is that it’s a Pilot pen.  I own a bunch of Pilot pens and all are well-made and reliable.  The screw-on cap has the typical Pilot insert that helps keep the nib wet and evaporation down.  It posts well and the pen is very light and balanced when posted.  At this point I’ve done a dozen sketches with the pen and I like it very much.  Oh…one last thing.  Platinum Carbon Black ink doesn’t stick to the sides of the CON-50 converter in this pen, allowing me to see how much ink is left.  I mention this because the opposite is true with my TWSBI Mini, which is also filled with PCB.  It’s a  small thing but not insignificant. 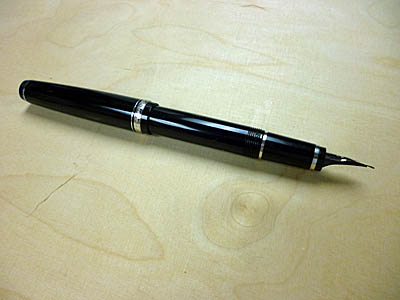