It’s been really cold here in Quebec.  So cold, in fact that I couldn’t bring myself to go out at all, let alone walk the hour to the museums.  I hadn’t sketched in several days because of this, so when the high temp hit -17C I jumped at this ‘warm’ day to head out.

I decided to go to the Musee de l’Amerique francais, the site of our recent sketchcrawl.  As I was there on a Thursday morning, I think I was alone in the museum, except for the staff.  It was quiet.  It was comfortable.  In fact, I sat in a nice, comfy sofa and sketched a mannikin who was dressed in a 16th Century gown worn in the movie The Fountain. 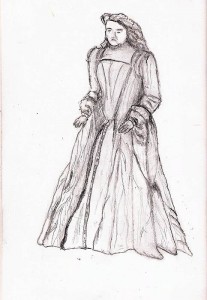 Still trying to figure out pencil sketching, that’s what I was using.  I decided early on that the subject might be too ‘grand’ for my Stillman & Birn 5.5×8.5 Epsilon sketchbook as the dress has a very bold pattern that I simply couldn’t capture in a 6″ tall sketch but I persisted doing the best I could.  Sadly, the sketch shows my biggest problem – I constantly smear the pencil work.  I can’t seem to avoid it.  It got worse, of course, when I sketched on the page opposite this one.  So, the sketch is more than a little bit ‘muddy’ but I sure had fun doing it.  The mannikin didn’t have much of a face and neither does my sketch.  Don’t hold it against her 🙂  I’m going to have to carry a sheet of paper to cover these sketches while I work, or maybe just go back to using a pen. 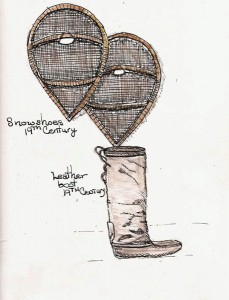 I moved to another room and was taken by a pair of 19th Century snowshoes.  These are the widest shoes I’ve seen and if horses made John Wayne bowlegged, these would surely do the same to their wearer.  I also sketched a boot that was associated with this display.  Here I used a Pilot Prera and some watercolor pencils.