Last summer was my first as a location sketcher – actually it was my first summer as any kind of sketcher.  I fell in love with the process and excitement of being out on the street, soaking up the sun and ambiance while sketching.  Quickly the early fears I had about people talking to me became one of the joys of the sketching experience.

And so I faced winter somewhat depressed as it becomes too cold for man nor beast to be on the streets of Quebec and I thought I’d have to do my sketching at home, in my office.  That has never interested me much, but then a couple fellow sketchers said, “We sometimes sketch at the museum – want to come?” and my world changed overnight.

I got a permit to sketch at the art museum.  I became a member of our Musee de la Civilisation, which also gave me access three other, smaller museums.  And I’ve met new people, had new challenges, experimented with new materials and learned a lot about seeing complex objects while drawing same with minimal equipment.  I’m sketching as much this winter as I did during summer.  The subjects have changed, but I feed my desire to sketch real things, in real time, without having to resort to drawing my spatula and coffee cup (grin). 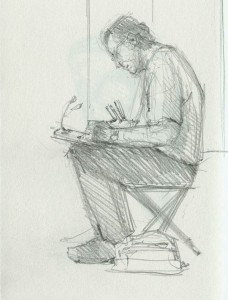 If that weren’t enough, Yvan Breton has become a good friend who is an architect and long-time artist.  He’s become both a companion when I sketch and my mentor.  His style and mine are quite different but he’s taught me more in the past couple months than I learned in my entire first year of sketching.  I confess that all the information he’s provided has my poor old brain scattered and flailing to keep up with all the ‘gotta try that…’ feelings I’m having right now but hey, that’s part of the fun.

The sketch above is of me, by Yvan.  He did this “quick sketch” while I was sketching in the Nigeria exhibit at the museum last Tuesday.  It’s one of my prized possessions.

I’ll complete this post by showing you several of the sketches I’ve had opportunity to do in the last week.  I think you’ll agree that the variety is far greater than my summer sketches, which are mostly buildings – my first love. 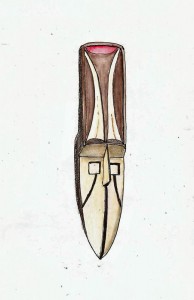 While we’ve sketched some of the Nigerian exhibit already, we’re starting to spend more time there because the Samurai exhibit is leaving on Sunday.  The funny thing about the Nigerian exhibit is that it’s full of great items to sketch but, it seems, they don’t become ‘great’ until you actually start looking at them as a sketching subject.  One is deceived by a walk-around in the exhibit and you conclude the items are a bunch of very similar, primitive sculptures.  Primitive yes, similar, not so much.  So many shapes, so many surfaces.  Wow! 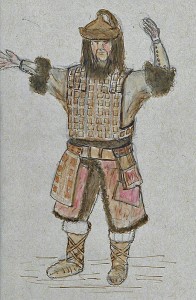 We spent last Sunday at the Musee de Amerique Francais, where I sketched Genghis Khan, or at least a mannequin wearing the Genghis Khan suit used in the movie Night at the Museum.  This was done in a Strathmore 400 “gray” sketchbook using Noodler’s Brown in a Pilot Prera.  Lots of fun, though all those squares drove me nuts. 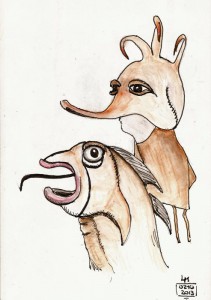 When I was done, I turned my attention to some large paper mache heads used by the Cirque de Soleil in their show.  These were ‘I gotta draw those’ subjects but I approached them with some trepidation.  In the end they were lots of fun.  Stillman & Birn Epsilon sketchbook, Pilot Prera/Lexington Gray and Faber-Castell watercolor pencils for this one. 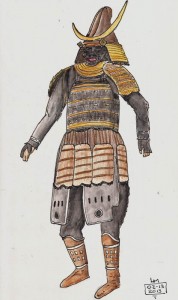 I’ll conclude by sharing my full Samurai suit sketch.  I’d promised myself that I’d do one before the exhibit left… just as soon as my skills began to match the amazing subjects.  I didn’t quite make it on the skills end but, before the exhibit leaves on Sunday, I did sketch this one.  I apologize for the absolutely weird positioning of the mannequin.  That’s not me distorting it; that’s how they had it positioned.  All of them were somewhat unnatural in their orientations in my opinion.  This one done in my Stillman & Birn Epsilon sketchbook, Pilot Prera, Faber-Castell watercolor pencils.

If you scroll back through the blog you’ll find lots of Samurai helmets, sketches of Joe Fafard sculptures, other Nigerian masks, and other stuff.  Museum sketching is really fun.  If you haven’t already, give it a try.  If you have any questions, feel free to contact me.