Sunday was meet and greet day, where people could come, meet and sketch with Liz Steel and Anne-Laure Jacquart.  Marc was, once again, the organizer of said event and I really don’t know where he gets his stamina.  All three of these folks had just returned from several days in Chicago for the USK Symposium and so they’d been doing sketching events non-stop for more than a week.

I figured that since I’d gotten to spend an entire day with them, today would be a day where I’d just hang back and get some sketching done.  As I’m an early riser, by 7:30 I was walking towards the City Hall meeting place (at 10AM).  I figured I’d play tourist and get some early sketching done before other people showed up.  This was a simple enough plan but one that went horribly wrong.

The problem came in the form of rain and by the time I arrived at City Hall it was pouring rain and I was soaked to the bone.  I had a raincoat but it didn’t seem to help much.  I ducked into a place called Eggspectation to get some breakfast but mostly to dry out.  I was successful with the first part but I was too wet to expect to leave dry.

That didn’t really matter because when I left it was still pouring rain and so, the idiot that I am, I walked around for nearly two hours looking at stuff I’d like to sketch if not for the rain falling from my hat. My hands permanently wrinkled from the water.  Oh, and did I mention that I’d approached this entire weekend with a sprained ankle.  My FitBit said that I’d walked over 50km on it this weekend.  You’ll see how that becomes important as this saga continues.  Let me just say here that the walking, combined with soaking wet feet, weighed heavy on this old man by the time things got rolling on this day.

But roll along it did and people started showing up between 10-10:30 and the rain started to give us a break as well.  We huddled on the patio of a restaurant that hadn’t opened yet while introductions were made.  Marc laid out the game plan for the day and we soldiered out in the hopes that the rain had finally abated.  For the two or three of you that don’t know these artists, I provide these snapshots.  If you look closely you might be able to see the aura that surrounds each of them wherever they go (grin). 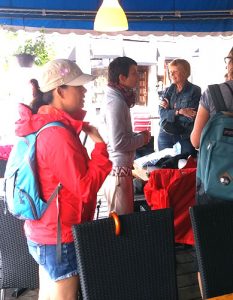 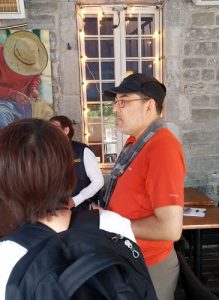 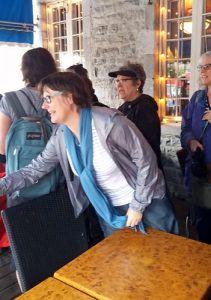 Our hopes were not realized as shortly after we started sketching, it started drizzling.  I’m not one for sketching in the rain but we really had no choice, and so I learned something.  Raincoats aren’t useful for sketching in the rain.  While many of the women tucked themselves AND their sketchbooks under umbrellas, even my small sketchbook was a target for the raindrops.  Marc was worse off than I was.  We were both doing quick sketches in small 3×5 notebooks but he had neither umbrella or raincoat.  He was just tough.

Anyways, here are the few little sketches I did during this session.  You can see evidence of the rain hitting the paper, causing the ink to bloom.   I spent a lot of time sitting, while lamenting the growing pain in my ankle, the beginnings of a limp and my growing sense of oldness as my body was letting me down. 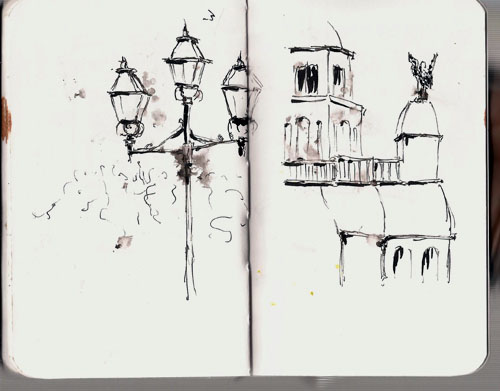 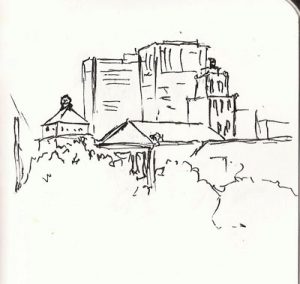 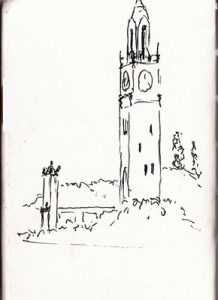 Then it was time for lunch and I was sure ready for it, or rather I was ready for a dry place to sit.  The normal sketcher talk took place over lunch and I learned something else.  I’d come to this sketchcrawl with the thought of traveling light so each day I had three pieces of Coroplast with watercolor paper taped to both sides of it.  For the drawing portion of the day this is wonderful, maybe even ideal.  For the “show me yours” part of the day… not so much.  I had none of the sheets I’d done the day before, nothing I’d done in the past, and so, I had nothing to pass around while others were doing that with their sketchbooks.  I felt bad about this; I were getting to see all their great sketches without me “paying back” the favor.

It’s something to think about for the future.  I love the set up Anne-Laure uses.  She explains it in this YouTube video.  I’m going to try it.  I’ve seen it done on a smaller scale but I like to work on a bigger sheet than A5 or A6 sizes so this might be what I need.

When we came out of the restaurant it had stopped raining and so we spread out around Place Jacques Cartier and started sketching.  By this point my ankle was barking loud enough that I’m sure others heard it too, but I sat down and tried to draw City Hall.  I made a lot of errors in this sketch but if you know nothing of what Montreal City Hall looks like, it might be ok (grin). 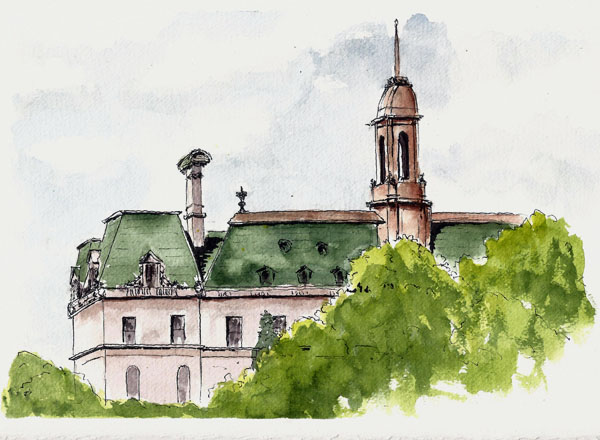 At this point I started evaluating my situation.  I was limping quite a bit  and I started thinking about the fact that I was supposed to help my daughter move from Ottawa to Montreal the next day.  My body had won over my desires and I made my apologies and left, limping my way back to the apartment.  I felt sad and somewhat guilty to bail out on such a wonderful adventure but, to quote my daughter, “It is what it is.”  Maybe that should be “It was what it was” to keep the verb tenses consistent (grin).

But wow…what I learned this weekend will require a lot of thought and even more action.  I’ve been doing dozens of quick gestures in a style as close to Marc’s as I can.  These are actually going well and lots of fun.  Lots of problems with proportions though, because I’m working too fast to carefully analyze what I’m drawing.

I’m also mixing lots of blotches of watercolor, trying to figure out how to get the proper thickness for drawing lines with watercolor, figuring out the effects of multiple layers of wash, etc.  And I’ve been reviewing sections of Liz’s courses and trying to achieve a better understanding of how to apply what she explains in them.  Oh…and I’ve been trying to emulate the amazing beautiful people that Anne-Laure does.  So much inspiration, so little time.