Our weather is marginal for sketching outdoors but the long winter has me pressing the limits of my cold tolerance.  I’m also motivated by the knowledge that at this time of year, there are areas in the old city that are more conducive to sketching (ie – you can see what you want to sketch) than they are later in the year when the tourists are here.

So, I put on a couple layers and headed downtown, to an area near the port area called Place Royale.  The most important feature there is a gorgeous church but I was after smaller game.

I was going to draw the corner of a wall – a special corner of a wall.  Streets in Quebec City during the 18th Century were narrow.  Carriage wheels, on the other hand, were very large and protruded out from the carriage, making it difficult to negotiate a carriage around the corners.

The solution was to inset the corners of the buildings for the first eight feet of so, creating an odd-shaped corner with no explanation if you wander the streets in the 21st Century.  But now, when you come to Quebec, you’ll know why some of the corners look like this: 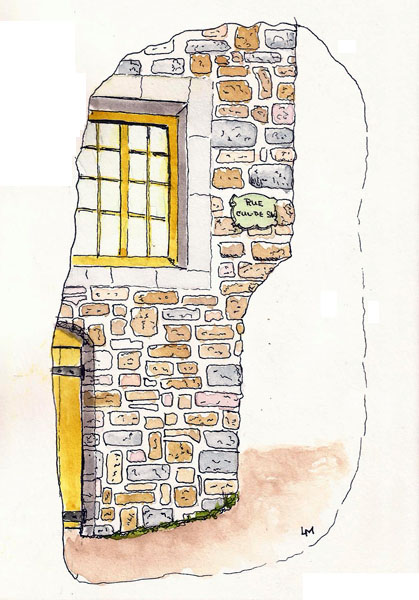 One Response to “Making Room For Carriage Wheels”