I’ve been very lucky.  When I became interested in sketching last September I had the Internet.  I could surf from site to site; I got lots of great information and saw the work of lots of other sketchers.  I spent time looking at Monet’s sketchbooks too.

If you compare Monet’s sketchbooks to what you see modern sketchers posting on the Internet you see a big difference.  Monet’s not as good as those modern artists.

Well, that could be one interpretation.  Another is that modern sketchers use the Internet to post their good sketches and not posting the numerous sketches done in the act of learning, practicing, or investigating ideas.  I concluded this explanation was more likely, mostly because I’m a fan of Monet’s work.

After a year and a half of experience as a sketcher, I realize my own behavior validates that explanation.  I post sketches regularly, but only a small fraction of the sketches I actually do and none of the many scribbled pages where I learn and develop pretty much everything I can do with a pointy device.  It’s too bad the learning process isn’t more evident on the Internet and this post is an attempt to correct that biased view of at least one sketcher’s output.  Here’s your chance to see that ‘dark side’.  Clicking on the photos will let you see how I play to learn.

I confess that it’s hard to show my, shall we call them, lesser sketches.  The pages shown here belong to a pile of similar sketches that have one goal.  My urban sketches are typically done with constant-width lines and I’m trying to learn to vary the pressure on the pen to allow me to take advantage of variable line width. 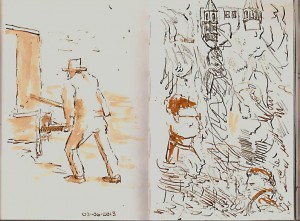 I begin with this one, mostly because of the right-hand page.  This is one of several that look like this.  As an aside, to those who don’t want to use good sketchbooks because you’re afraid to muck them up, this is one of my Stillman & Birn Alpha sketchbooks (4×6).  I don’t use cheap paper even when doodling.  All I was trying to do was to get used to how hard I needed to press on a Noodler’s Creaper flex pen to get lines of different shapes and densities.  The sketch on the left was done from an existing sketch drawn by my buddy Yvan.  He was kind enough to give me a series of sketches he’d done from sketches of the masters.  Mine are less masterful than his but I’m learning a lot by copying these sketches. 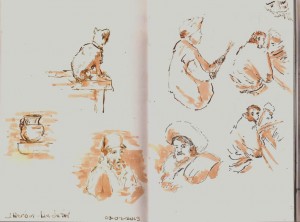 Here’s another spread of sketches copied from sketches.  Nothing much more to say about the technique of copying other people’s work except to say that it allows me to concentrate on the lines and let’s me ‘feel’ what it’s like to make them. 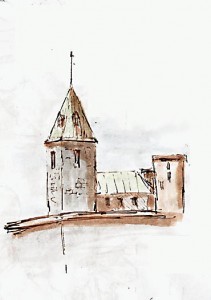 But there are other ways of learning/practicing techniques.  I’m a building sketcher.  Here’s a quick sketch of one of the towers in old Quebec.  I did this one by copying a quick sketch I did of the area.  Copying my own work, but with a new look/technique, helps me see the difference in a special way because I know the original so well. 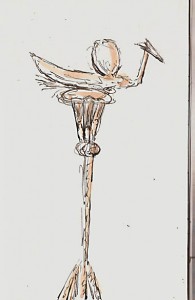 I’ve also been doing a lot of museum sketching, sketching Nigerian masks and statues.  While there on Tuesday, I also did this quick sketch of a praying mantis on top of a pole with some gizmos supporting it.  Not anything like my typical cartoon style but I actually like how this one turned out.

I wondered how this varied line width stuff would affect quick sketching and so while waiting at to see my rheumatologist I started scribbling.  The page on the right are just pieces of people who were either sitting or standing, doing the same thing I was. 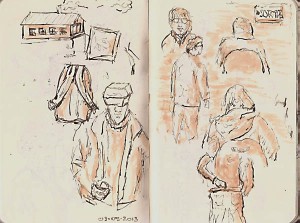 The left page was when I started thinking I’d be called any second so I was looking for tiny things to sketch.  The first thing I sketched was a McDonald’s burger box.  Then I sketched the backpack and then scribbled that poor excuse for a building sketch.  As I still hadn’t been called, and the guy had finished his hamburger, I sketched him, his head becoming the burger box.  Is this how Picasso’s cubist period started?

I hope you’ve enjoyed my dirty laundry.  I have a lot of it.  Much more, in fact, than the cleaner stuff  I post regularly here and in Facebook groups.  It’s fun.  It’s how I learn..  How about you?  Do you have sketchbooks full of stuff like this?  Monet does.

One Response to “Learn Sketching By Playing”