When we returned from Toronto we wanted to spend a few more hours in Ottawa, preferably not walking a gazillion steps, before we piled in the car and pointed it towards Quebec City.  Somehow, and I’m still wondering how, it was decided that we should walk, just shy of a gazillion steps, to the Canadian Museum of Nature , where we would ALL sketch.  Yep, you heard that right.  My wife and daughter produced sketchbooks and we all headed to the museum.  Maybe I was dreaming.

I wanted to draw in the dinosaur rooms.  They wanted to draw mammals.  We split up and agreed to meet in a couple hours.  Group sketching is always fun, but amounts to people getting together so they can ignore each other for extended periods of time.  This is punctuated by greeting each other again and the intense kibbitzing that friends do when they haven’t talked in a while.  We sketchers are a crazy lot but we’re having more fun than most people.

And so it was as I headed off to draw more bones.  But I didn’t.  I went into a room where they had a room-sized diorama, with two Tyranosauruses (Tyranosaurusii??)  looking over a walkway, mouths open and looking hungry.  On the other side were two Tricerotops in defensive positions.  I’m no James Gurney but I had to try to draw one of these guys.  I also got to draw in one of the new 9×12 Stillman & Birn Beta sketchbooks.  I think I’m going to like this size, though it does present some scanning issues. 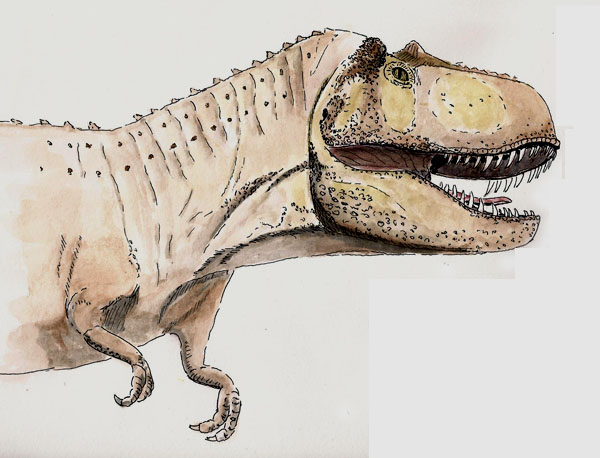 As I drew I learned that this was a prime stop for school tours.  They bring the kids in and ask them questions like “What do you think these Tyranosauruses eat?” and “Do you think they are hungry?”  And as the kids stand between the participants in this confrontation between predator and prey their eyes get big and they become very quiet.  It’s fun to watch.

And the kids were lots of fun.  They’re always curious.  They can relate to people drawing better than adults can.  But they are reluctant to talk until you look up and say hi.  Then the fun begins.  One kid wanted to buy my sketch.  Another said, “Hey, that looks just like a dinosaur.”  But mostly we talked about how much fun it was to be at the museum.  It was a very good morning.

Best of all, when I met up with family, they’d had fun sketching lions, rabbits, pikas, bats, and owls.  They were smiling.  And we only had “just shy of a gazillion steps” to walk to get back to where the car was parked.

4 Responses to “Just Me, The Kids, And The Dinosaurs”