Sometimes things work out.  Sometimes they don’t.  I used the excuse of picking up my daughter so that I could blitz around Ottawa sketching everything in sight – or so thought when I left Quebec City at 4:30AM.

Why so early?  Because I wanted to be at the Nature Museum when it opened at 9:30AM.  And that’s what I did as  I walked in the door at 9:35.  There was only one problem.  I was starting to feel poorly, like I gotta sit down poorly.  I didn’t, but instead I started walking around my favorite museum.  Everything I looked at seemed “so complicated” or boring.  I had absolutely no energy for sketching, or much of anything else.  I sat down and just stared across the lobby.

For the rest of the day I bounced around Ottawa, trying to right the ship and get some sketching done.  I went to the War Museum for the first time.  I’ll need a book light to sketch that place but it’s fantastic and I’ll return, hopefully with more energy.

I continued to mope my way through the day, walking a lot, accomplishing nothing.  I did a bunch of little quick-sketches but little else.  I’m not one to have a hard time finding things to draw or lacking in motivation to do it but there it was, in front of me… ALL DAY.  What a wasted opportunity.

Eventually I picked up my daughter and we went out for a great Korean dinner and I spent that night crashed on her floor.  In the morning we parted ways as she had an afternoon exam and I was determined to get some sketching done.  I was feeling better and like that little train climbing the hill, I was chuffing “I think I can, I think I can.” 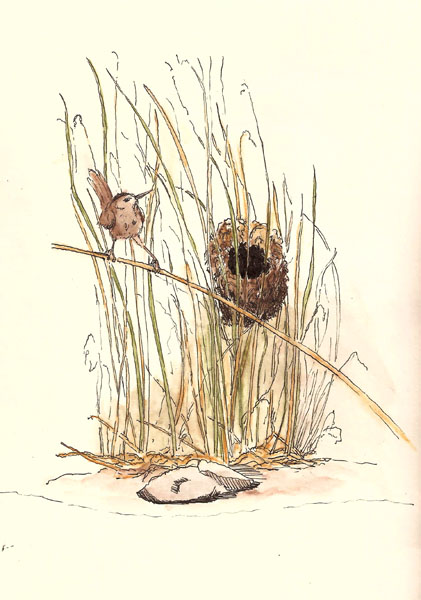 And I did.  I went back to the Nature Museum, which for some reason was being overrun by huge groups of kids.  Normally I like interacting with the kids but there were so many of them I actually felt like I was in their way.  I drew this sketch of a marsh wren and its nest and then decided to head for less populated pastures.  I had an hour or so before I was to meet my daughter for lunch.

I actually did get some more sketching done but I haven’t scanned them, so they’ll have to wait for another day.  Check back for part II of my Ottawa wanderings ‘real soon.’

6 Responses to “Just Got Back From Sketching Ottawa… Sort Of”