Today was a new sketching experience for me.  Most of my sketching has been directed at buildings; mostly on the streets of Quebec City.  But as I’ve reported, winter has driven me into museums and so I’ve been boring you with sketches of Samurai helmets and Nigerian masks.

My sketching buddies, who are all better sketchers than I am, are similarly afflicted with the ‘It’s Too Cold To Be Outdoors Sketching Blues’ and Celine decided to do something about it.  She invited Pierre, Yvan, and myself to her house for a sketching session in her studio.

Her studio is a wonderful place, with lots of spot lights, tables and shelves full of “stuff” to sketch.  It was hard for me to turn my back on her great art library, but we were there to sketch so we did.

Pierre pointed at a bowl of artificial fruit and said, “I want to sketch that” and just as though following orders from Capt. Picard on Star Trek, we followed his orders and ‘made it so.’

Celine set up a spot light over the fruit and we sat in a circle around the fruit bowl, and sketched…and sketched.  It took me forever as I’d never done a still life of any kind.  Does a building count as a still life?

I’m still getting used to using watercolor pencils and this sketch taught me a few things, including some “gonna have to figure out how to…” sorts of things.  One thing I found interesting is that they didn’t seem to work as well in my S&B Beta sketchbook as they do in my S&B Epsilon sketchbook.  I guess the smoother paper of the Epsilon keeps the pigment higher on the paper, making it easier to wash them out evenly.  With regular watercolors I really prefer the Beta paper as it’s so much thicker. 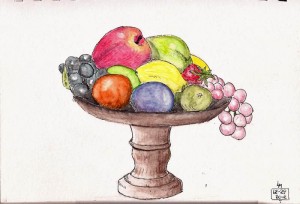 Here’s my completed sketch, done in a Stillman & Birn Beta sketchbook (6×8), using a Pilot Prera and Noodler’s Lexington Gray ink.  Don’t tell the urban sketchers I did this one.  They might drum me out of the corps, though it was done ‘on location’ so I guess it qualifies.  I’m still reading the fine print on such things.

Sketching fruit works up an appetite and Celine and Pierre had prepared a feast for us.  My usual sketching lunch is a granola bar and an apple so I was completely unprepared for a heavenly soup, fine cheeses, crackers, and fruit.  This was followed by dessert and a yummy oolong tea.  Let it be written that Larry ate too much. 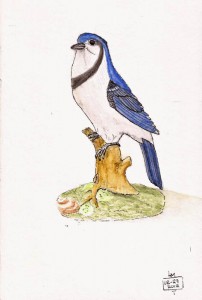 And then it was back to sketching.  Well, I indicated some reluctance as I was once again buried up to my nose in Celine’s art library.  So many books…so little time.  Eventually I found myself sketching a small ceramic statue of a blue jay.  It’s the first bird I’ve ever sketched.  It’s also the first bird that’s ever stood still long enough for my slow sketching pace to capture it.  Thanks, bird.  Here it is, done in the same sketchbook, same pen, same ink, same limited abilities.

We finished up with discussions of sketching and Yvan, as usual, provided some great insights.  His skill is enormous, and exceeded only by his patience for my silly questions.  I write this as the end to a perfect day.  Thanks again, Celine.

10 Responses to “Indoor Sketching At Its Best”