If you sketch in the presence of others you’ll hear it.  It comes in many forms but, if you get down to the bone of what’s being said it’s “If only I had time to sketch like you do” and it’s said as though my daily 24-hour time allotment is longer than their 24-hour allotment.  Or maybe they’re really talking to themselves, excusing themselves in some twisted way.

I’m not sure what it is but I never know what to say.  The truth is, we all have the same amount of time per day.  Yes, some have to work more hours than others.  Some have kids.  Some are in school.  In spite of this, the average American, it is said, manages to watch four to five hours of television every day.  Facebook and Twitter traffic suggest that the hours spent in front of computer aren’t insignificant either.  Sooo…..whether you believe it or not, discretionary time is something we ALL have available to us.  It’s how you spend it that determines whether you do or do not have time for sketching.

The truth is, it doesn’t take much time to be a sketcher.  It’s true that I do spend time with sketching friends and that I often wandering the streets, enjoying extended sketching sessions on occasion.  But I’ve been “very busy” for the last few days and so haven’t done any “serious” sketching.  In spite of that, I have sketched and I’ve had fun sketching.  I thought I’d show you a few of the smallish sketches I’ve done, providing a bit of context in an attempt to demonstrate just how easy it is to include sketching in your day. 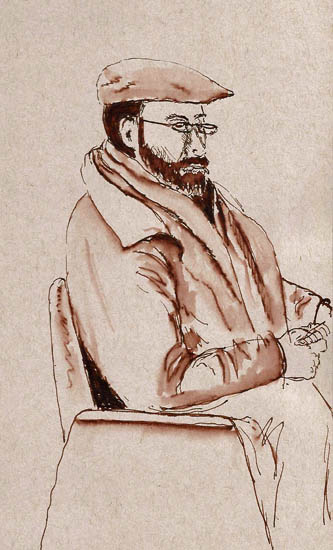 The single thing that is required to be a sketcher is to be READY to sketch, which means you have paper and pointy device with you at all times.  If my sketching were limited to finding special blocks of time to set up my art materials, I wouldn’t do 2/3 of the sketches I do.  As the Boy Scout motto says, “Be Prepared.”  It’s also important to think about enjoying the process of drawing, not creating great art.  Sketching is about the fun – about the doing – or it should be.  If you’ve got to find that ‘perfect’ scene, you’ll never sketch.

Here’s a sketch I did while I was at the library.  It took only a few minutes.  Libraries are target-rich environments and one of the few places where humans sit still for a while. 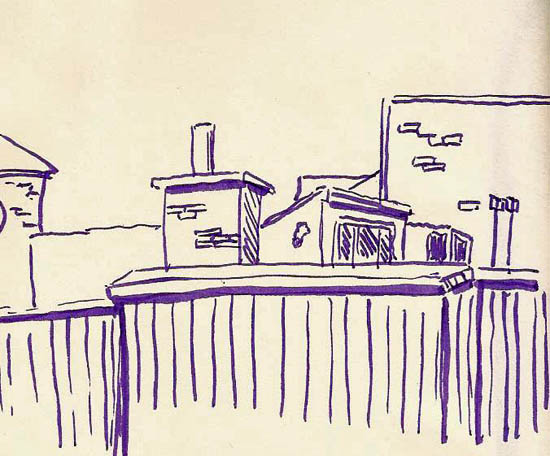 I stopped by the art store and picked up some Pitt brush pens, followed by a stop for coffee.  It seemed as good a time as any to try out one of the new pens.  This rooftop sketch was done in my el cheapo ($1.25 at the dollar store) notebook between sips of coffee and increased the enjoyment of that pause in the day. 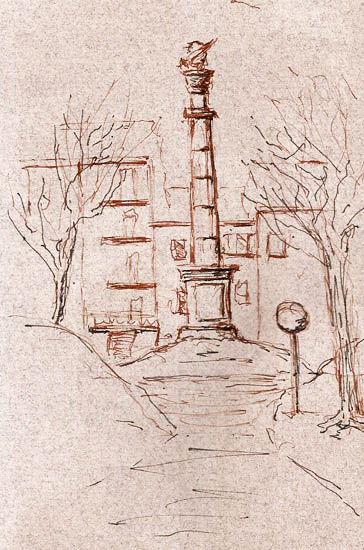 I’d been at the art museum and if you look out their front window you see a monument to General Wolfe, the guy who died winning the battle for Quebec City back in 1759.  Behind it is a street lined with buildings.

That night, I was watching American Idol with Chantal and I was bored, so I picked up a pen and a 3×5 piece of Canson Ingres paper (I have these materials available at my TV watching perch) and drew the scene from memory.  It only took a few minutes but it was a pleasant experience and I emphasized the use of loose, light pen strokes. 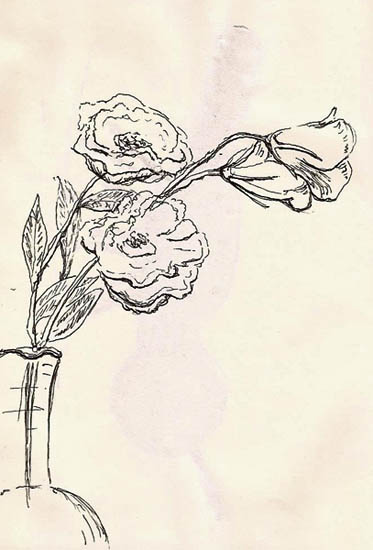 At another time I was watching a Toronto Blue Jays pre-season game and drew this group of flowers.  That are part of a larger, dried flower arrangement in our living room.  Used a Platinum Carbon pen for this one.

Are these great drawings?  Nope…but they were fun.  Did they take a long time?  Nope.  In fact no ‘extra’ time was required at all.  I just counted and from Sunday to Friday, when I’ve been ‘too busy to draw,’ I’ve done more than a dozen sketches, all in ‘spare’ time.  The only exception was my attendance at a music recital that I would have gone to with or without sketching.  It doesn’t take much time to be a sketcher.  You DO have time… don’t you?

One Response to “If Only I Had Time To Sketch…”