The sad thing is that I can’t say exactly what day I did the original deed.  When I started sketching I was doing it on any old paper using a fountain pens.  I drew a gazillion cubes in all orientations, somehow knowing this was good practice in drawing three dimensional objects.  I tried to draw everything in sight…in sight of my office that is as I was afraid to go out on the street to sketch.

Unfortunately, all of those sketches were thrown away because I didn’t know any better.  Then, one day, someone in an internet group suggested that I upload one of my sketches.  I did and the participants became aware that I was throwing them away.  I was told that I should keep everythiung because I would, one day, want to look back on them.  Guess what day it is?

I remember that my first attempt at street sketching took place in a mall, with a tiny sketchbook held close to my chest.  I drew a clothing store mannikin, figuring she wouldn’t mind and wouldn’t walk away.  I was scared to death I would get “caught” in the act.  I drew quickly and poorly and left the second I was finished.  I guess I figured stealth sketching was a viable approach. 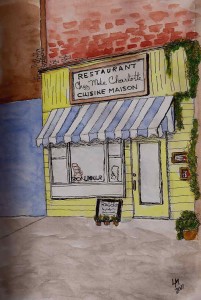 Here’s the first building sketch I ever did.  It was done from a photo of this small restaurant.  I remember being proud of it at the time, mostly because the many sketches that preceded it that were much worse (grin).   Interestingly, this was the same subject that launched me as a street sketcher – the first sketch where I perched on a tripod stool and drew.  Here’s that one, done in March of 2012. 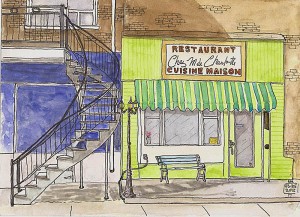 Since then I’ve done hundreds of sketches on the street as street sketching has become a way of life for me.  Here’s a snapshot of the sketchbooks I’ve filled so far.  The black ones are all Stillman & Birn.  The rest are of lesser quality. 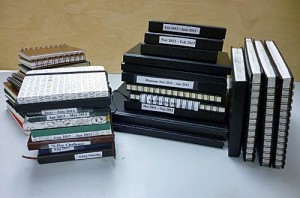 Sketchbooks from my first three years as a sketcher

Internet groups and friends continue to fuel my learning curve climb and I’m enjoying the journey.  Thanks to all who are helping me with that process.

So, I’m three, going on four.  That sounds pretty good to an old man.  I’ll end with a more recent sketch in an attempt to recoup a bit of sketcher dignity (grin). 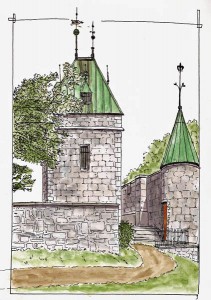 6 Responses to “I Think It’s My Birthday”