The other day I headed out on a quest for sketching subjects.  Actually, I was going to the post office but I’m always looking for things to sketch – my prime directive.

As I came out of the post office it had started raining and I was ill-prepared for it, so I ran across the street to a bus stop and soon I was on my way to one of the larger malls in town with the thought of doing my daily walking there.  I arrived to find some sort of carnival-like thing going on with kids and strollers, whose size has grown to that of a Buick in recent years, everywhere.  Because of the crowds it was hard to navigate through the mall but I managed to cruise the bookstore, the tea store, and to get a look at the new food court – a result of ongoing remodeling.

And then I saw it, an idea sketching subject.  No, it wasn’t the guy in the bright, lime green jacket twisting balloons into toys.  It was an opportunity to draw a little boy who WASN’T MOVING.  He was transfixed on the man who was making a Spiderman for him.  Relative to most encounters with kids, I had all the time in the world to sketch him, and I took advantage of the anomaly.

When I finished I decided to start drawing Mr Greencoat but just as I started, he finished and handed the Spiderman to the little boy.  The boy ran to his mom, excited by his new acquisition.  Mr. Greencoat had an immediate kid replacement and went to work making what appeared to be a dog.  Undaunted, I continued drawing him, trying to adjust his new position to the old one I’d started in my sketch and substituting Spiderman blobs for the dog blobs before me. 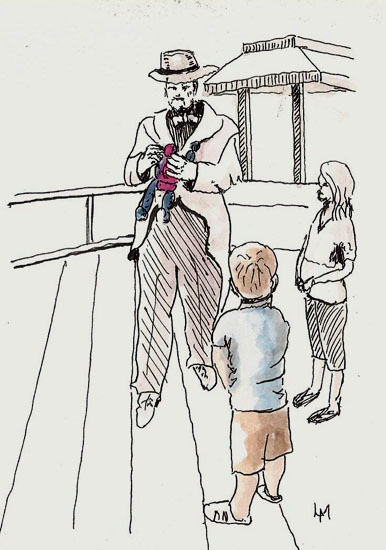 Then the fun began.  The little boy came down a bit from his euphoria, saw me, and walked over to see what I was doing, probably as much because of the other kids who were watching me as anything.  If you ever want to feel like the Pied Piper, sit down in a sea of kids and start sketching.  Kids “get it.”

When he looked at the sketch he immediately recognized himself, Mr Greencoat and his Spiderman and cried out “C’est moi! c’est moi!” as he proudly looked at the other kids.  While he had been completely immobile as I sketched him, he was now doing a good popcorn imitation and, jumping up and down, he went to his mom and dragged her over, saying “C’est moi!”  I got banged a couple times by Spiderman as the bouncing continued and I was trying to complete Mr Greencoat.  I got excited too and what started out as a simple little quick-sketch of a little boy became let’s add that little girl,  what’s that thing behind them?  It was, as they say, a hoot.  My only regret is that I didn’t think at the time to give the sketch to that little boy.  I think it would have competed well with Spiderman for a place in his room.

9 Responses to “How To Stop A Little Boy”