At one time, Quebec City had a marvelous zoo.  I got to see it when I did my post-doc here.  By the time I returned to live here, however, politics had caused its demise.  These days a portion of the zoo grounds is now a park called Parc des Moulins because there is a windmill on the grounds, but I miss the animals.

Anyways, the Artistes dans les Parcs went there and had a lovely day.  The weather couldn’t have been better and so hanging out with a bunch of artists, in a heavily forested area, with a creek running by was really relaxing.

For a while I was off by myself because I’d decided to draw the rear of one of the old buildings and the garden area behind (in front of the behind?) of it.  This too is a relaxing place as there is a small pond and creek as part of the garden.  Here’s the drawing I did in the morning. 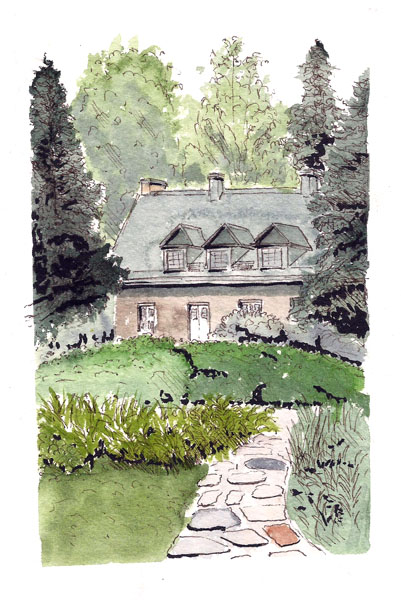 Then it was time for lunch and we sat around enjoying each other’s company.  Wish I’d think about taking photos of these gatherings.  I never think about it until I write the blog posts (grin).