I’ve mentioned the frequent relationship I’ve had with the medical profession over the past few months and one of those associations has been with the vampire lady at the hospital who insists on poking me to suck blood from my arm. She then hands me some vials in which to pee, a situation wrought with performance anxiety.

And so it was on Monday morning.  I had an appointment but that typically means that I end up sitting in a waiting room for 20 minutes or so before being called.  This is called sketching time.  I sat down to wait, got out my Emilio Braga (4×6) notebook and started scribbling poor facsimiles of the people doing the same thing I was… waiting.

But just as I was getting into it they called my name.  My response to this is something only a sketcher can know.  Most would be thrilled that they didn’t have to wait and I was too, sort of.  But a part of me was also saying “Hey, I’m sketching here” and I had to abandon my sketching almost before I started.  This was all I could accomplished so I wrote some words to fill up the holes (grin). 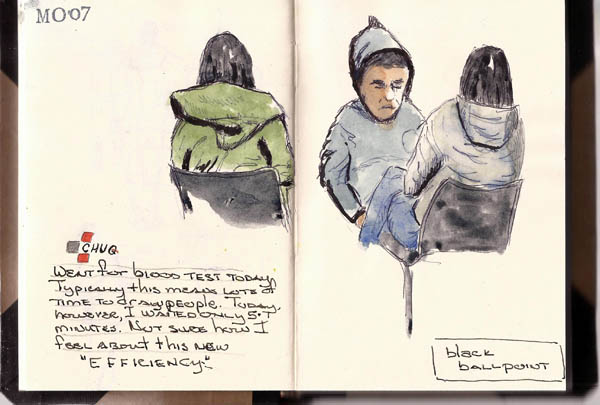 2 Responses to “Going To See The Vampire Lady”