I do more sketching ‘off camera’ than I post on my blog.  I do these for a variety of reasons.  Most are done quickly for the simple reason that I need to draw something.  Sometimes I do them to try out a new pen or paint.  Sometimes they’re done to practice a technique, like the little gouache paintings I did a couple days ago (horrible by the way).

But sometimes, quite often actually, I draw something inspired by something I see on the internet.  Most I try to mimic the style of the artist in an attempt to walk a mile in their shoes.  Mostly this fails in a ways similar to me trying to walk in high heels, but these are also some of my favorite things to do as there’s absolutely no pretense that I’m creating something “from” myself.  It’s sort of an out of body experience.

I thought I’d share with you a bit of that stuff, with apologies to their real authors, the internet sketchers who share their work so we can appreciate, enjoy and maybe learn from them.  This first sheet is from a Canson XL multi-media (7×10) pad that sits next to my laptop.  It’s full of stuff like this. 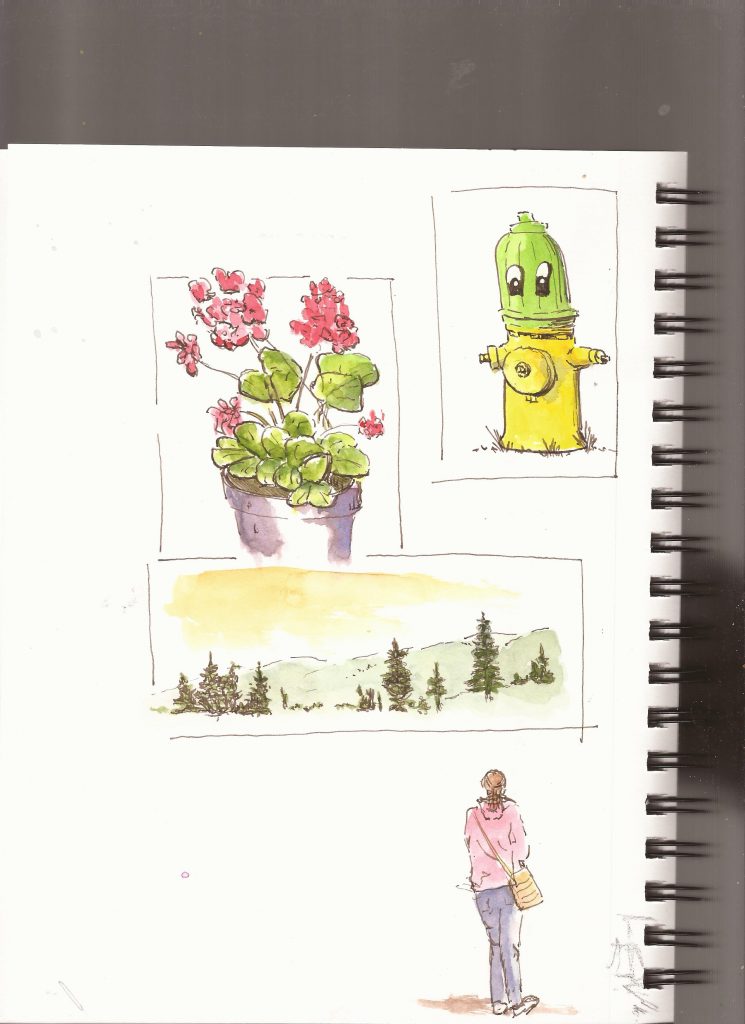 The top right is from a set of fire hydrants drawn by Arlene from the Artist’s Journal Workshop.  She did a sketch of several very colorful hydrants and when I saw the yellow one with a lime green top I had to draw it.  I decided, however, to extend its top a bit, give it a head tilt of personality and I added a pair of eyes.  I was having fun.

I’m sad to say that I can’t remember who did the geranium plant but it was a very freehand version of one and so I followed suit.  Leaves and flowers randomly stuck on the page as I tried to turn a piece of paper real estate into a geranium.

The little landscape came from the background of one of those pesky ads that precede a YouTube video, with a lot of ‘it could look like this’ thrown in for good measure.

Lastly the lonely girl.  She was was from another commercial and standing on a street. 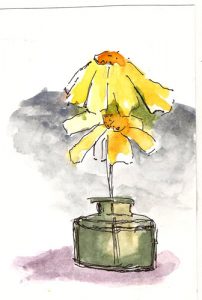 Erik Davis posted a sketch similar to this, saying he was trying something different.  I thought that a good idea so I followed suit.  It’s about 3×4.

If you’ve taken any of Liz Steel’s great courses you know that there are lots of things to copy and/or mimic.  While you’re supposed to be doing it ‘your way’, I often try to do it Liz’s way.  I’m rarely successful because her style is so much more loose and quick than my own.  It always feels good to me, however, so I’ll continue doing it.

This time it’s a sketch slightly in advance of her Watercolor on Location course that starts Sept 4th.  I’m signed up for it so I have access to the introductory lessons.  Liz’s sketch is somewhat more complete than mine.  Hers is also a LOT bigger than mine (mine is about 4×5). 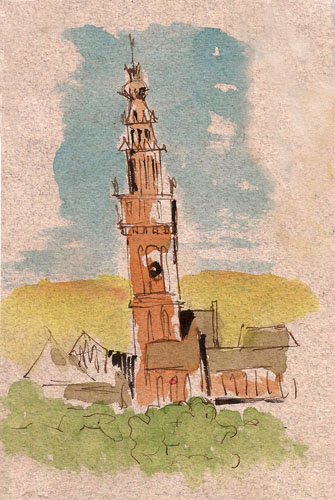 Walking in the shoes of another artist is probably not for everyone but I find it very informative.  It makes me appreciate even more how special their art work is and I think I learn quite a lot from doing it.  Doing this also causes one to understand that you  can’t precisely walk in another artist’s shoes.  It’s more like walking in high heels if you’re an old man.  But give it a try.  You might like it.

One Response to “Gaining Inspiration And Trying Stuff”