This time of year the temperatures cool (most of our days don’t get above 20C) and day length is shorter.  We become aware that soon we’ll be cooped up in our houses except for when we have to go out to shovel snow.

And so we take advantage of any good weather day and play outdoors.  For Chantal and I that generally means a couple trips to Ile d’Orleans, a large island near Quebec City which is largely inhabited by farmers and cows.  Specifically, head to a cafe on the south side of the island where we can eat brioche, drink good coffee, and breath clean air as we look out over the St. Lawrence River.

And that’s what we did last weekend.  Coffee and brioche were fantastic as always and, just as ‘as always’, after we’d sat for a while we decided to drive around the island.  We headed east and ended up in St. Francois, one of six small towns on the island.  The highlight there is a little candy store, though on this trip we avoided it.  Instead we parked in a parking lot next to the church, sat on a bench, and drew what was in front of us.  This is what it looked like. 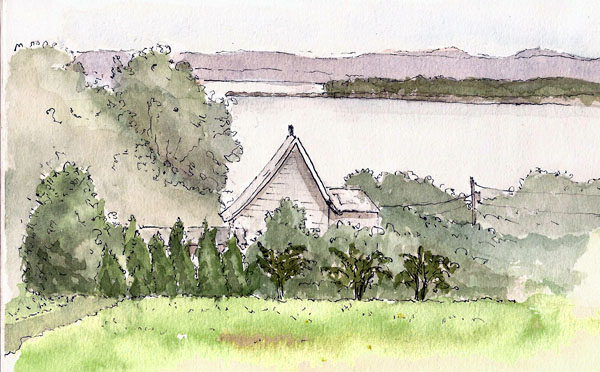 We drove on, stopped at a park on the east end of the island.  There’s a very tall tower here that, if you climb to the top, provides a fantastic view eastward along the St. Lawrence.  We didn’t climb it because, right now, my right knee and ankle aren’t being very cooperative.  Instead, we got back in the car and headed for a place with the name Maison des nos Aieux.  There is a large cathedral in front of this place but the “maison” refers to a large house that sits on a bunch of land that’s been turned into a park and flower garden.  The “aieux” refers to the fact that the place is to honor the original inhabitants of the island and there’s a large monument with their names on it.  We like to stop there because it’s so peaceful to just sit on one of the many benches and breathe some more clean air.  I’ve sketches several things here but today I got fascinated by a simple water spigot, which suited the short time frame we were there.  Sometimes simple is just right and this was one of those cases.  A fitting end to a great day. 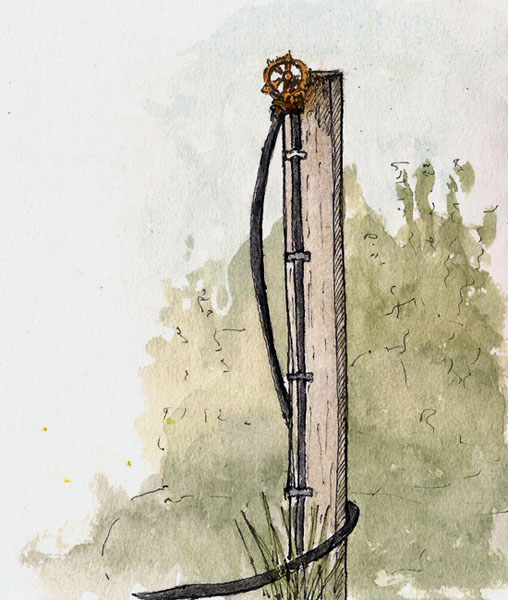