I was heading downtown the other day, marching along ice-covered sidewalks and hopping over occasional mounds of snow when it occurred to me – it was pretty “warm.”

Now you’ve got to understand what the word means in early March in Quebec City.  It means I was walking briskly, wearing a sweater over a long-sleeve shirt and with a heavy coat on top of that.  It was “warm.”  The temperature had risen all the way to -5C (22F).

And possibly a result of my being a street sketcher harboring a desperation brought on by a long winter, I made a decision.  Rather than go to the coffee shop, or to the library, as I was planning, I would head to Place D’Youville (a central location inside our old, walled city) and sketch something OUTDOORS!!!

And it all started great.  When I arrived there were a bunch of ice skaters waiting for the Zamboni to clean off the ice rink.  I took a position among them on one of the benchs, got out my Stillman & Birn Alpha (4×6) and my Hero 578.  I wasn’t completely delusional about the definition of “warm” so I decided this would be a sketch done quickly.

By the time I got to thinking about adding some details, the notion of “warm” had long since disappeared, as had my ability to feel the pen in my hands.  My brain had shifted from “get it right” to “get it done” and I was quickly bringing the sketch to a close.  I packed up and headed for the McDonalds on St. Jean Street. 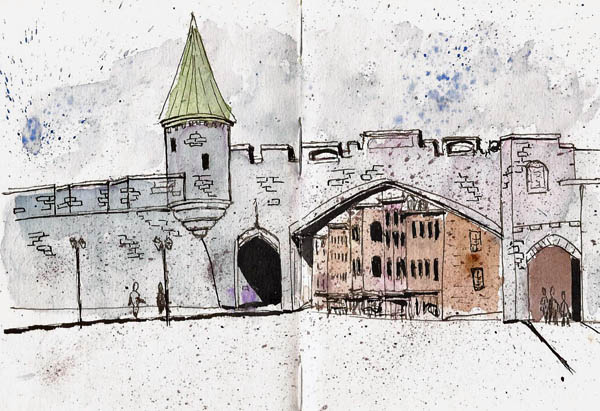 After huddling over a cup of coffee for warmth, I decided to add some color and got the bright idea to “boldly go where Larry had not gone before” and play with mixing color on the paper and I capped this off with a bit of splatter.  While I had no idea what I was doing, there was a serendipity about the process that was fun. 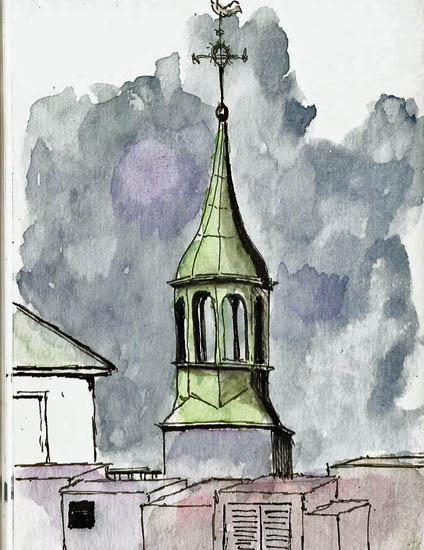 Because McDonalds was very busy, they’d opened up their third-floor eating area so I headed there, hoping to get a different look at the rooftops.  Unfortunately, there were big posters covering most of the windows so the view was limited.  But, by ducking down and shifting forward a bit, I could see under an ad for something called a McWrap and I could see the steeple of a small church next to the downtown hospital (founded in 1639).  It stuck up behind a pile of metal thingies on top of the building in front of it.   Same sketchbook here but I used my Pilot Prera on this one.

While it wasn’t as “warm” as I thought, it was a great day and, as they say, I broke the ice on 2014 outdoor sketching… almost literally.