Street sketchers are used to people walking away while they’re being sketched, Cars leaving or trucks arriving to block the subject being sketched.  I once had a train come along and require that I stop sketching.  But this was a new one.

There was another fire at the Musee de la Civilisation last week.  The construction workers should contract themselves out as arsonists as this is the second on in the past few weeks.  I was there and was just sitting down to sketch a beautiful mask from 200AD when the alarm went off and the guards started moving people out.  As I exited the exhibition hall there was obvious smoke in the large open area that serves as stairwells and lobby for the museum and water was spraying down from the roof.  Fun stuff. 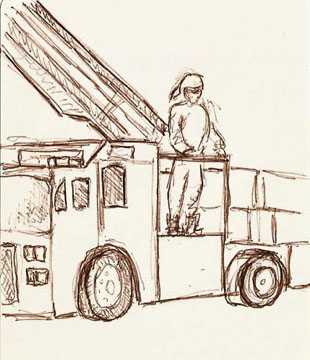 The police and firemen were very well-organized, though, and they had shut down the street by the time I hit the front door and they were funneling everyone into the parking lot across the street.  While bunched up with a lot of other patrons, I quickly sketched this sketch with a Fisher Space pen I carry in my coat.

We stood around for a while like cows in a corral and quickly two things became obvious.  The first was that the construction workers had gotten the fire put out and the other was that we weren’t going to get back into the museum anytime soon.

Yvan and I decided to walk across town to the Musee des Beaux Arts where there was to be a couple recitals by conservatory students.  There, we did a bunch of quick sketches of the performers and I did a quicky of a part of the building I could see through the curtained window.  Here are some of those sketches. 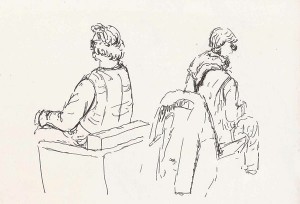 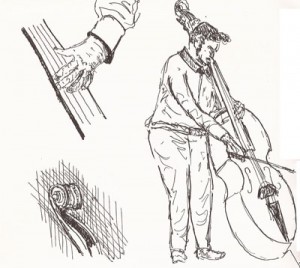 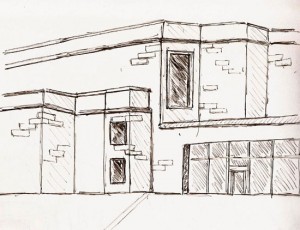 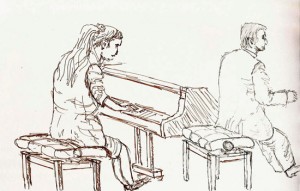 One Response to “Fire At The Museum”