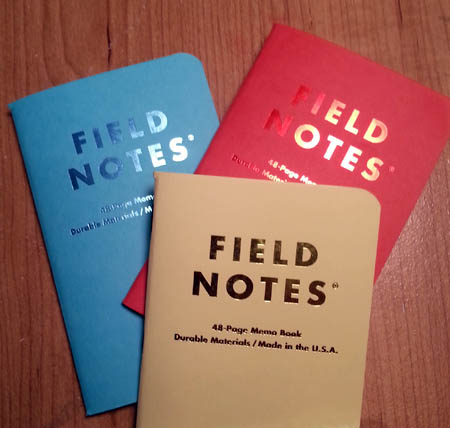 I confess that I’ve been a subscriber to Field Notes, a series of small (3×5) collectible notebooks, for the past year.  These are handy notepads but mostly they come with paper that’s too light for sketching, at least with fountain pens, and they generally come with pesky lines or grids on their pages.

A while back, though, they did one of their quarterly releases that included 70# white paper.  It did have a light grid but it could  be easily ignored and proved to be a useful sketchbook at least for those of us who like the convenience of having a small, light sketchbook with us at all times.  And Field Notes have done it again… sort of.

This time they’re released a set of three colorful notebooks (Easter colors??) with a couple significant twists on their typical approach.  This time, the 70# paper is BLANK… just like we like it.  And it’s RED, BLUE and YELLOW… which we like…err…uhm… I’ll let you be the judge. 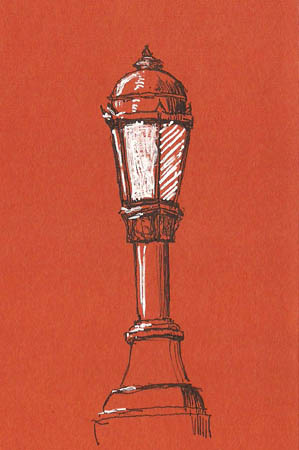 When I received mine I was very unhappy.  Who the heck needs paper with these ridiculous colors.  I threw them on the debris field and this my desk and didn’t even open them.

Then Tina Koyama “experimented.”  She’s much smarter than I am and saw the potential.  You can see her results here, and here.  The results were undeniable; I had to try them.

Like Tina, I started with the red one.  I took it with me when I went to meet some people to attend a small art exhibition.  I stood outside and in spite of the cold decided that I should try to draw a lamp on red paper. This was not a great idea because my hands quickly became frozen and I was struggling to get the white Uniball pen to write in the cold.  Nevertheless, I had started my adventure down the small red road. 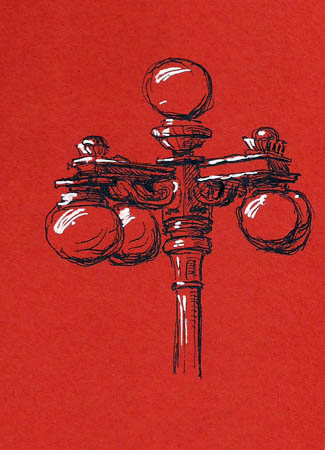 That night I sat at my desk with a photo of a street lamp on my laptop.  I only spent a few minutes on it but the red paper made it a lot of fun.

The next night I was watching TV with my wife and as I’m prone to do, I got a bit bored not doing at least one other thing while watching the glass teat.  So, after checking my Instagram feed, becoming frustrated with vitriole on Twitter, and checking in to see what the Blue Jays are doing in spring training, I got my red Field Notes, my Platinum 3776 and I grabbed the glass container that holds my watercolor water on my desk.  Watching TV became more fun as I drew that container. 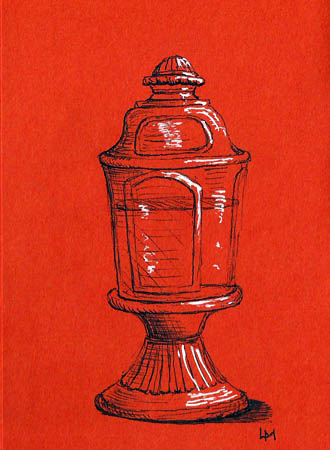 I’m a guy who loves drawing lines more than anything else.  I’m drawn to watercolors mostly cuz everyone else is, proving that I’m as much of a lemming as anyone else.  But the red paper releases me from the thought of adding color so I can just enjoy drawing with my fountain pens.  It won’t be the only sketching I do as I’m not sure how well it fits into my urban sketching passion, but for sitting around the house drawing, it’s pretty sweet… or is that sweet tooth?

I did give the approach a try while I was at the museum and drew this interesting flask.  It’s a flask which was traditionally filled with perfume.  Egyptians gave these to each other as part of a New Years celebration.  This was fun and may show me the way to incorporate the toned paper into a location session as this only too me a few minutes between my normal sketching. 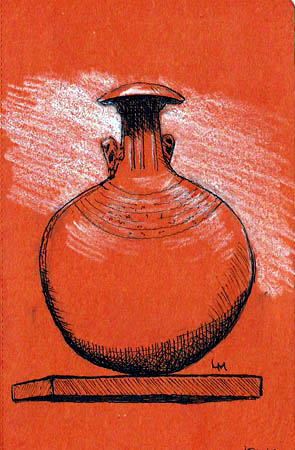 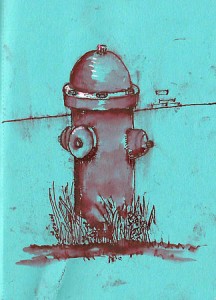 I was more doubtful about the other two colors but, again, Tina led the way.  This morning I decided I should try the blue book so I could post a result in this blog post.  I decided a fire hydrant might be nice and as I’d just filled a Pilot Metropolitan with Nooder’s Red-Black I started drawing.  Not good…really bad, in fact.  Noodlers Red-Black is supposed to be “water-resistant.”  It is not… not even a little bit.  I touched the drawing with a small brush with the idea of pulling a bit of shading from the lines and those lines just exploded.  Thank goodness I was drawing a red thing because I was in chase my tail mode trying to clean up the mess.  I wasn’t very successful and smarter people would probably not post this sketch.  Here it is.  Not the fault of the Field Notes but it’s a great example why I don’t use Noodler’s “water-resistant” inks.

And so I had to try again so I could provide something…anything in the blue book that looked ok.  I did this quick architecture/landscape sketch from my limited imagination.  Hope you like it. 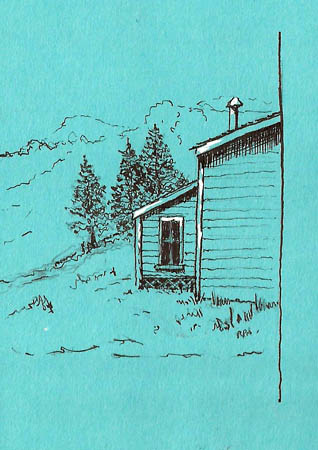