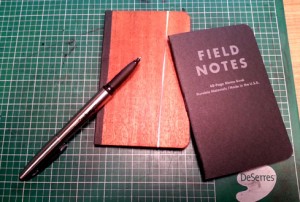 I’ve written several blog posts talking about my experiments with various small (3×5) notebooks as a medium for quick-sketching.  I’ve tried the Moleskine Cahier, the Baron Fig Apprentice and most recently Field Notes.  I even made a small binder for Field Notes to provide some support backing while sketching.  I think I’m about to bring that quest to an end and thought I report on what I’ve seen and what I’ve concluded from the experiments.  I wonder if Ponce-de-Leon and Coronado felt the way I do when they figured out that the fountain of youth and the city of gold were myths.

If I were quick-sketching with pencil, or ballpoint, this approach would work quite well.  But for fountain pens and certainly light watercolor washes, the paper is simply too cheap and too thin to handle the task.  Anything but the finest fountain pens will bleed through, causing the back side of the paper to be unusable.  I’m actually ok with that, though this reduces these notebooks to 24 pages making one (me) wonder why I’m not simply using better paper even if it costs a couple cents more.  Watercolor washes fail on two counts.  The paper buckles and the watercolor soaks in immediately and none of the techniques one (me) wants to use are possible.  Here are a few examples: 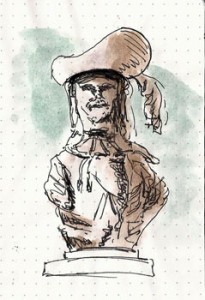 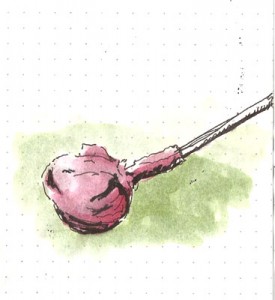 I love Tootsie-Pops. This was interesting as I used the Pilot Falcon but a Pentel brush pen for shading. No bleedthrough at all.

Large bronze leaf/boat statue in front of the market area. Pilot Falcon and some light watercolor. All watercolor work buckled the papers considerably, though they sort of flattened once dried 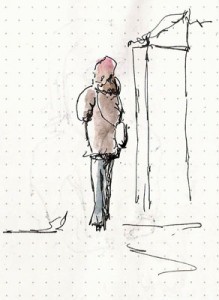 So, in the end I’ve learned a few things.  Mostly I’ve learned that what I said a long time ago remains true.  To get good results you have to use good paper, at least I do.  Another thing remains true.  There isn’t any in a thin, small format.  The closest I’ve gotten to that was a small sketchbook I made by cutting up several sheets from one of my Stillman & Birn sketchbooks but I’m trying hard not to go down the road of making sketchbooks.

One Response to “Field Notes As A Sketching Medium”