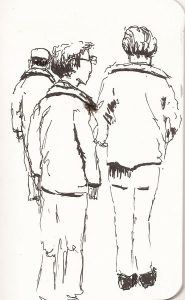 I did a blog post a while ago about what I called “extreme sketching.”  It was an idea that originated from Marc Taro Holmes.  We were going out, in mid-winter Quebec temperatures and doing five minute sketches in a small format.  Marc is quite good at it.  Me, not so much. 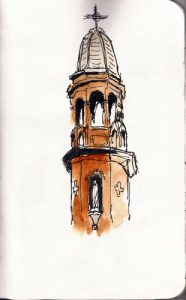 But it was a great exercise.  I struggle to hold a small sketchbook in one hand, while drawing with the other.  For some reason I just can’t slow the sketchbook down and the results are impacted a lot by both the sketchbook and the pen moving at the same time.  I was hoping to practice that enough to eliminate the problem.  I did not. 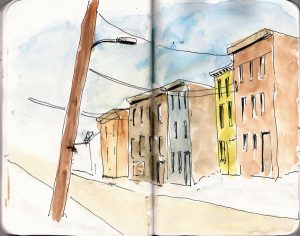 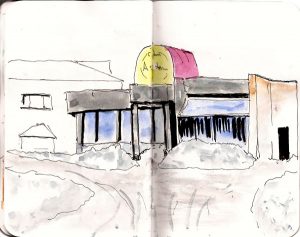 I also wanted more time quick-sketching.  I do a lot of quick people sketches but I don’t quick-sketch buildings or street scenes.  To get a good drawing I have to look at my subject for the better part of five minutes, thinking only about the proportions and relative locations of things before I start drawing.  All of those processes must be abandoned if I’m going to do the entire sketch in five minutes.  I do think I improved upon this because of this exercise, but I’m not sure how much.   I also haven’t figured out how to draw snow with a pen and so I ended up with lots of cottonballs in front of my buildings. 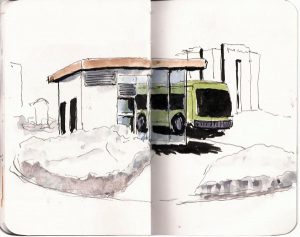 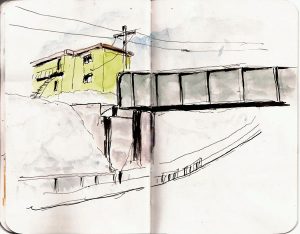 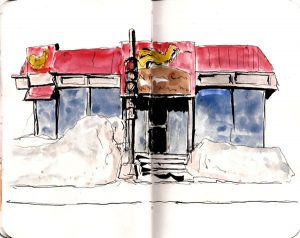 The other thing I wanted to do was to just get outside sketching.  This I accomplished.  I ran this experiment down to -20C (-5F).  When it got colder than that, I gave up.  I’m a sissy when it comes to cold.  But I did manage to do fifty of these sketches, nearly filling a small Stillman & Birn Epsilon softcover book.  I’ll probably do some more this summer, when it’s not so cold.  Here are a few of the sketches I did beyond the ones I posted previously. 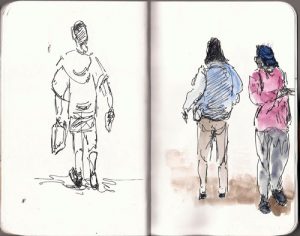 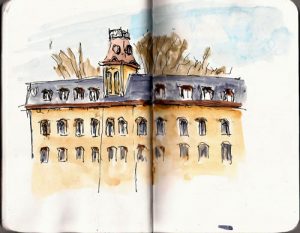 Do you do crazy things like this?  I hope so.  I don’t want to be the only one.