There is a series of outdoor sketching events, in Quebec City, this year.  Time will tell how organized, or not, they are but Yvan and I attended on a week ago.

We were to meet downtown in a small park near the Chateau Frontenac, Quebec City’s challenge to Hogwarts.  It’s a grand hotel and there’s a huge fountain in the park next to it. 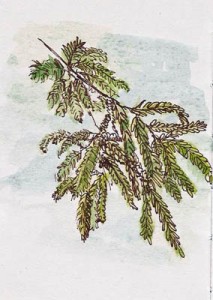 While waiting to meet up with Yvan to walk downtown, I did this little sketch of a branch that caught my eye.  It doesn’t take much to get my pen moving.

When we arrived there were four other sketchers there and we all scattered about and got busy sketching.  Yvan and I took advantage of the fact that they’d been working on the fountain and it was dry.  We climbed into the fountain, sat on its perimeter and started sketching some of the fountain details. 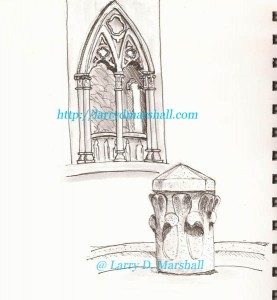 We broke for a quick lunch and then it was back to sketching.  I love this large steeple and so it became my target.  About half an hour into the sketch it started to rain so we hot-footed it to the Subway a block away.  We got lucky and got a seat by the window and we drank coffee and sketched through the window.  There was a bike race going on and the rain didn’t stop it so we had plenty to sketch.  I’ll spare you my quick sketches from that session as they’re particularly bad.

Once the rain stopped, though, we returned to finish our sketches.  Here’s the steeple.  Done in a Stillman & Birn Alpha (10×7) using a TWSBI Mini and Platinum Carbon Black. 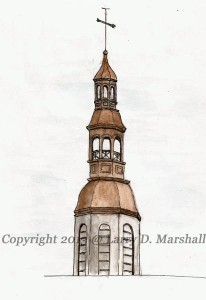 It was a great day, though I remember being particularly tired at the end of it.