In the two years that I’ve been sketching I’ve actually developed a ‘style’, which surprises me somewhat as it seemed not long ago I was wondering if I would ever be able to draw anything, let alone have a ‘style.’

I like my style, which is more ‘illustrative’ than artistic.  Some might even claim it to be cartoonish.  I sometimes call it that.  In any case, when I sit down to draw something, the resultant sketch reflects that style.

My style has two drawbacks.  The first is that those who don’t speak sketcher try to fit it into ‘fine art’ and, well, it just doesn’t.  Some day ‘finished’ sketching will be acknowledged by the art community at large but so far, it’s tough slogging.   The other drawback to my style is that it’s not ‘fast’.  My sketches take longer than those done by people using looser, less detailed approaches.  This is not bad or good but sometimes it limits my ability to quickly capture a scene.

So, I sometimes experiment with quicker, looser ways of sketching.  Of course I do a fair amount of quick-sketching of people but here I’m talking about sketching things.  Here are a few examples of those attempts. 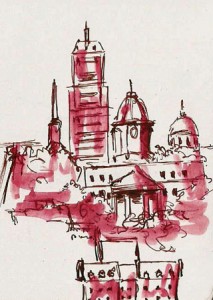 I did this little sketch of a piece of the Quebec City skyline, experimenting not only with very quick (only a couple minutes) sketch but also with a washable red ink.  I kinda-sorta liked the result.  It’s no more than two inches square.

Using the same pen/ink combo I decided to see if I could grab enough detail from a very complex hotel facade in 3-4 minutes to make me happy.  Can’t say this pleased me much but maybe…with lots of practice… naw…not working for me 🙂 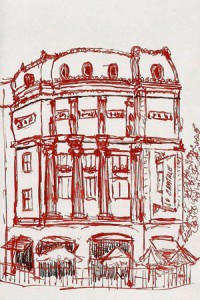 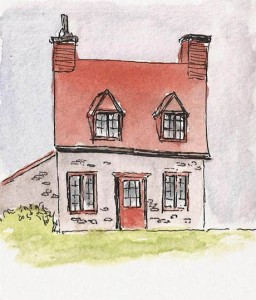 Here’s another experiment.  It’s only about 2×2 and my thoughts were to do a quick, small sketch that could be part of a journal page.  I really would like to start adding annotations to some of my sketches and to that end I sketched this tiny house in about five minutes, including the watercolor.

I was sitting in a park in ‘lower town’ of Quebec City and there’s a row of buildings that look down on the park, trees filling the area in between.  I decided to quick-sketch it.  Probably took me 10-15 minutes, which for some is not ‘quick’ but if I were to do this with my ‘style’ it would take at least four times that long.

I sort of like the results.  The trees aren’t sufficiently developed for my taste and I hate restated lines on buildings (buildings aren’t supposed to look like they’re vibrating).  This one was done on two pages of a 3×5 notebook so it’s a bit larger than the others. 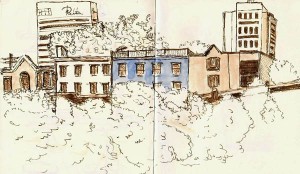 I’ll continue experimenting with different styles and approaches as I think I learn something every time I do it.  Who knows what my ‘style’ will be in another year.  Do you experiment with styles?

9 Responses to “Do You Experiment With Sketching Styles?”