I’m trying to figure out watercolors.  My use of them over the past few years has been very childlike.  I look at the subject and I put blue where blue should go, green where green should go, red where…., well you get the picture.  I’ve been careful to always paint within the lines. 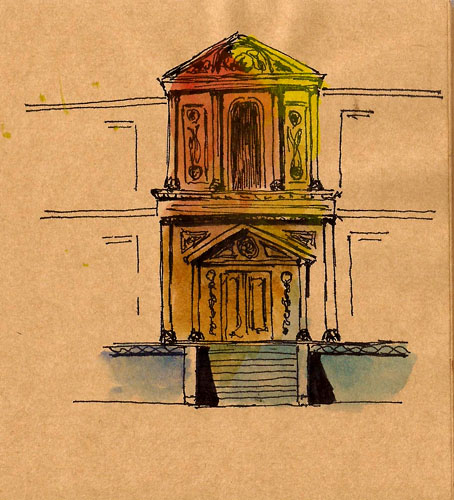 More recently I’ve started thinking about shading and such but still, I often envy those who are far more loose with their color interpretations.  I don’t really know how far I want to move in that direction but the other night I was watching baseball and I’d drawn a facade from my imagination in a cheap toned sketchbook.  While the paper was not good for watercolors, I decided to play a bit so I sat on the couch, legs curled up Kelly Ann Conway style, and I started adding colors.  I couldn’t work wet in wet as the paper wouldn’t allow it but this is what I came up with.  I liked it.

The next day I decided to try the same thing on a piece of Fabriano Artistico CP.  I started by wetting the entire facade and then dropped in blobs (see how I’ve mastered the technical terminology?) of paint to sort of mimic what I’d done the day before.  Again I was pretty happy with the results.  It looks like no facade I’ve ever seen but I felt it created an ambiance that suggested light coming from the windows… or something.  Anyway, I felt these experiments were successful and I will pursue more of them.  What do you think?  How do you learn to do this sort of painting?  I sure don’t know.