I have a question.  If you get showers in April, and they continue through May, will there be LOTS of flowers in June?  I sure hope so because Quebecers’ moods, will need a boost.

By date and temperature, we have finally gotten to spring and we sketchers are chomping at the bit to get out sketching.  In fact I witnessed a bunch of them, including myself, wandering around in the rain, looking for stuff to draw.  It was quite a sight.

We were attending the first of a series of plein air painting gatherings organized by the great Denise Bujold – great because she’s done this and because she’s so darn good at it.  There are 16 events scheduled, one a week, throughout the summer and fall.  But for this first one, surprise, surprise, it rained.

It was held at an apple/vegetable farm on Ile d’Orleans, a large island near Quebec City.  When Yvan and I arrived we found a gaggle of sketchers huddled in a large space that houses an art gallery during summer tourist season.  Eventually this group spilled out into the garden adjacent to the building and we literally wandered in the rain, pointing at things we could sketch if the rain would stop.

Eventually we made our way to a place where there was an overhang and a few picnic benches and everyone set up shop to sketch.  Across a field there was this scene and I confess that I didn’t have my heart in it and it shows.  But I did get to sketch, outdoors, and with other people.  That has to count for something.  There was supposed to be another event today but it’s pouring rain so it was cancelled.  I’m in desperate need of some flowers. 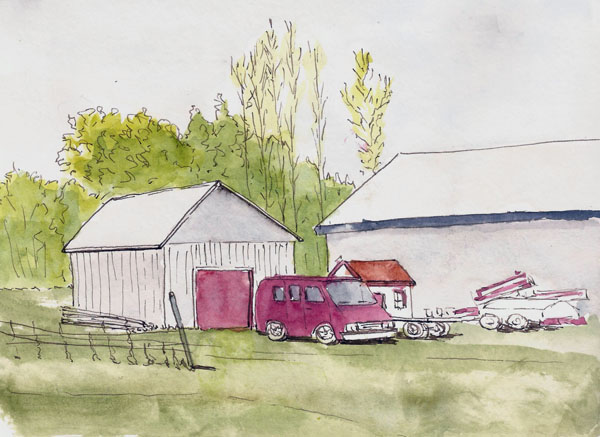