Like many artists, I collect things to draw, or at least that’s the excuse I use.  Along the top of every bookshelf in my office/studio are crammed old bottles, vases, skulls, diecast cars, animal figurines and statues of all sorts.  In the old days, pre-pandemic, I loved to visit flea markets and garage sales, looking for something I “needed.” A few years ago I found a plaster head that I think is Japanese.  As I recall it cost me a buck, maybe two. Like so many of the items that I’ve bought to draw, I’ve never drawn this head… until this weekend.  Here’s the result.  The time spent was well worth the $2 purchase price. 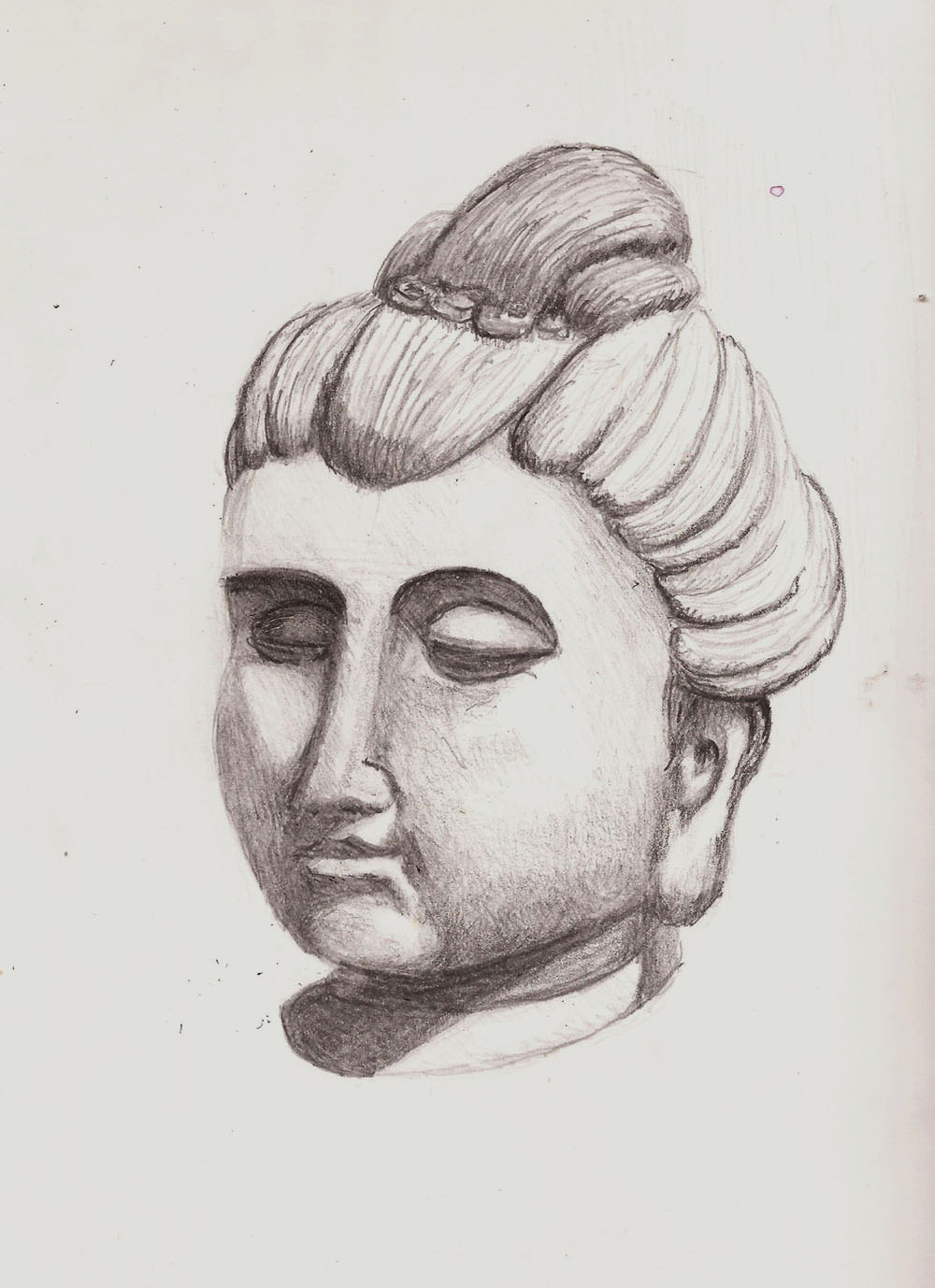 I remember, it must have been a decade ago, and I was taking part in a Cathy Johnson workshop/tutorial on pen and wash art.  It may have been the one she did for Strathmore.  Anyway, one person asked, “does this require drawing?”  I thought this was the stupidest question ever because Cathy made it clear that we were going to draw THINGS from life or photos.

Since then I’ve given little thought to that question because I have run in urban sketching circles where everyone understands that the base skill of everything urban sketching is drawing.  But now that I’m wandering in the world of oil painting, things are different.  All the instructors have to emphasize that to paint well you have to draw well and if you don’t, you won’t.

And so I ask you, what is drawing if one assumes you can paint without doing it?  I bet, as a person who draws themself, you have an answer.  I thought I did but here’s what The Primacy of Drawing, a 500+ page book on drawing has to say about it:

“It should be reasonable to expect that a book devoted to the exploration of drawing should begin with an authoritative definition of its subject.  However, my examination of many, many definitions of drawing, both contemporary and historical, has proved to me the futility of attempting such a task.  Any formula would have to encompass the indefinable status and contradictory aspects of drawing, and therefore would immediately dissolve into a web of disclaimers.”

So that’s why people don’t understand what drawing is (grin).  One of the big problems of defining drawing is that definitions should not only define the thing being defined is, but also what it is not.  We have a similar problem in modern definitions of art, which exclude nothing from being considered art, including cans of excrement contributed by the artist.

And so we’re left with “drawing” being an amorphous activity where people believe they can paint scenes or objects without drawing, all the while using a brush to define the outlines of said things.  Very confusing. 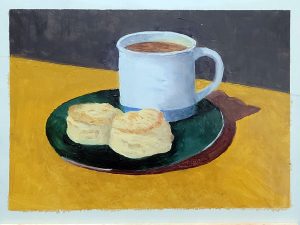 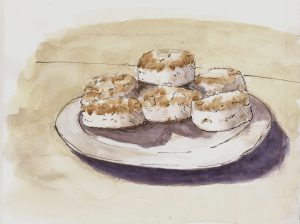 Pen and wash sketch of biscuits

And so I come to the earth-shaking question.  When I draw an onion with a brush, using oil paints, is it a painting, or is it a sketch of an onion in the same way it would be if I drew it with my fountain pen?  Why is this relevant?  It isn’t really.  Only something to ponder.  But I was adding tags to my latest oil painting/sketch/drawing and I came to the choice of “Sketch” and I wondered, is it a sketch or not simply based upon the medium I used.  Yes, yes, it can be anything I want it to be.  But which is it really?

While the COVID pandemic generated a bunch of negatives, there have also been positives.  For instance, because Shari Blaukopf couldn’t travel or do her in-person workshops, she decided to produce a series of video watercolor workshops and made them available on her website. 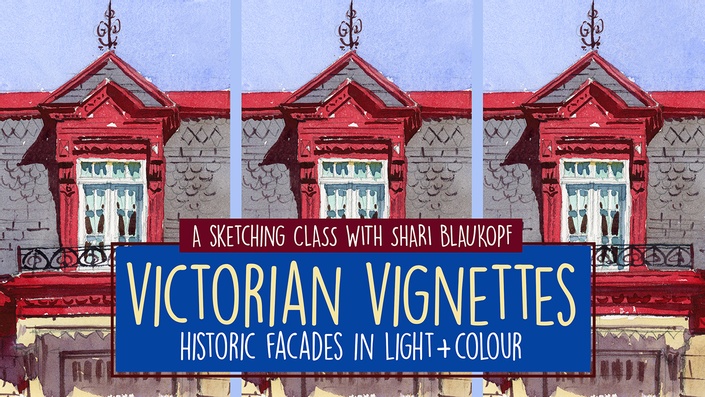 I bought several of them and will probably buy more because the pricing makes them irresistable.  There’s only one problem.  Buying them didn’t make me a better painter.  And while watching the videos taught me a bunch of stuff, this didn’t improve my painting abilities much either.  Surprise, surprise.

Seems I’ve actually got to move a fuzzy stick around… a lot, if I’m going to improve and I’m not good with fuzzy sticks.  My approach to “painting” has been to do a complete pen and ink drawing and then to quickly add local color, being sure to stay “inside the lines.”  Most of the time, my paint detracts rather than enhances the original drawing. Painting Shari style isn’t like that at all (grin).

Shari starts each of her workshop studies with a pencil, drawing outlines of the major components.  I’m not much of a pencil-driver either, but a pointy stick is a pointy stick and so I have no trouble with this step.  Here’s my first attempt at painting a Victorian window: 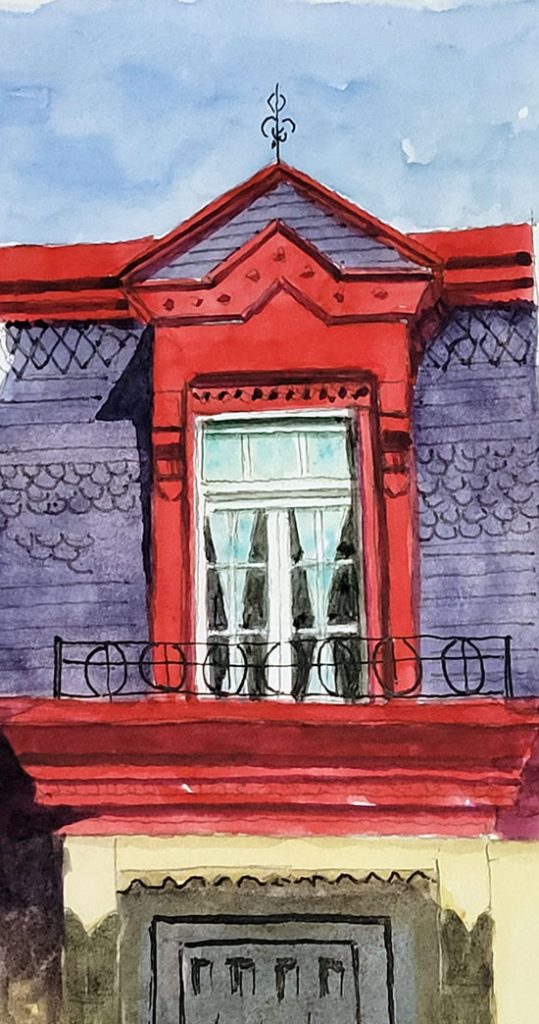 It’s not horrible, but it’s not even close to Shari quality.  My brushwork is sloppy.  I expected that (see above about my fuzzy stick management), but it’s the other stuff that suggests I wasn’t paying attention.

I love how she presents these workshops, though, and with more time with my fuzzy sticks, I just might figure out how to do it.  Hope so.  Thanks to Shari for making these workshops available.  With my help I bet Shari CAN teach me to paint.

Lots of us are dealing with COVID isolation by sketching our backyards and stuff in our kitchens.  We’re no longer locked down and it’s pretty safe to move around because people are reasonable and we’re all wearing masks.  Still, I’m reluctant to spend much time sketching on the streets.

I took advantage of the fact that I have a collection of Schleich animal figures.  If you’re unfamiliar with them, they are very detailed and well-painted figures and each if beautifully proportioned, unlike so many of the animal figures made for kids.  I’ve bought many of mine from art stores but the satisfying ones I got for pennies at local flea markets.  Here’s a batch that Chantal gave me for Christmas. 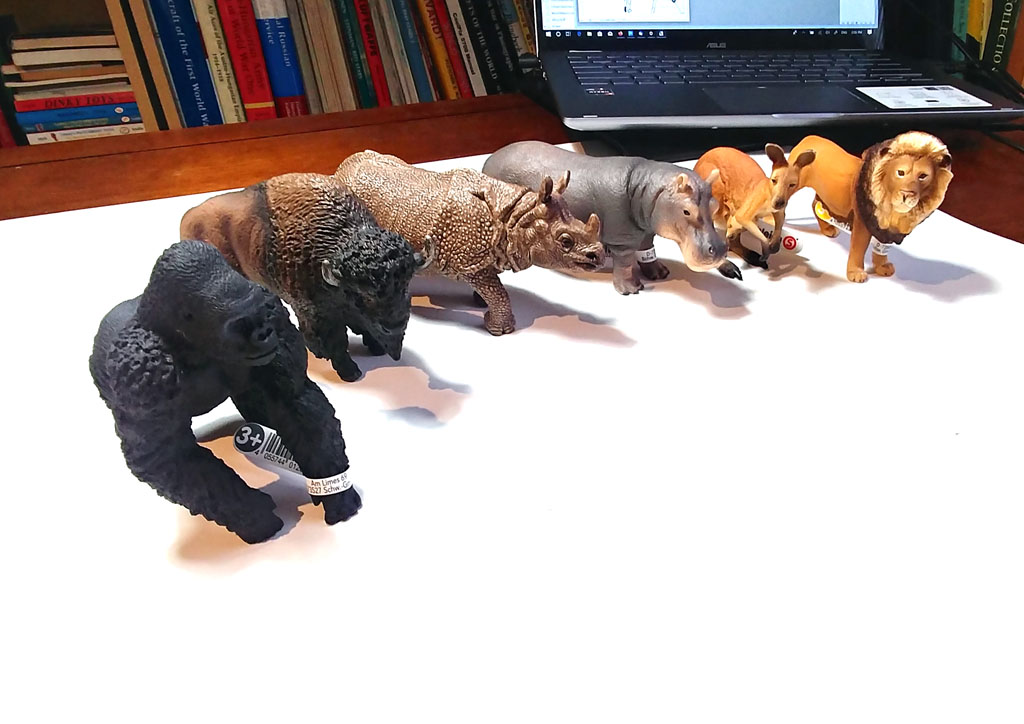 I was about to watch a baseball game and so I grabbed my panda bear and drew him while the Blue Jays played baseball.  A great combination.  This is in my Hahnemuehle Capuccino notebook and rather than using watercolor I grabbed a black and white colored pencil to add some “color.”  Pandas are very accommodating when it comes to color. 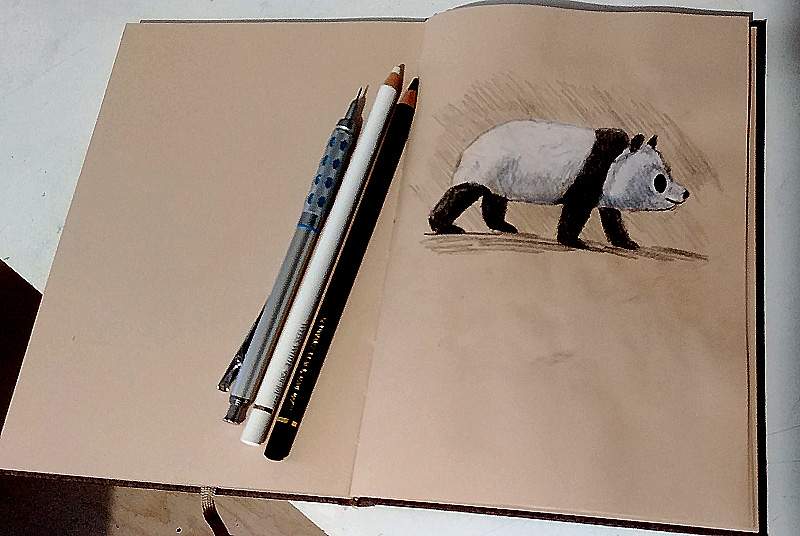 We’ve been having a lot of heat lately.  I guess it’s mother nature’s way of telling me that I complained too much when spring didn’t come soon enough.  Anyway, the result has been a lot of growth in our new vegetable gardens.

One result is that our butternut squash is attempting to escape.  It jumped the wall of the garden and is now running along its edge, using the garden wall to hide its actions.  I had to sketch quickly because it is growing fast, but here’s my capture of the action.