It seems that with all of the issues that face us these days that New York’s Mayor de Blasio could pick something more pressing than elimination of horses from Central Park.  Then again, that is consistent with a lot of the weirdness we see from our politicians these days.

But indeed, this anti-equine maybe claims he wants to replace the horse carriages of Central Park with electric cars.  Progress?  Throwing tourist dollars down the drain?  Eliminating one of the few ways for city kids to see animals?  Are horses just too much nature for New Yorkers, or just for Mayor de Blasio?

I bring this up because here in Quebec City we have horse-drawn carriages.  Tourists pay way too much money to be transported around the old city and parts of the Plains of Abraham, behind one of the many beautiful horses who work for… well, I’m not sure who signs their checks.

But the horse union, long ago, must have lobbied long and hard for proper facilities.  Behind each horse is a ‘waste capture device’ which prevents horses from being embarrassed by things they might drop along the way.  And when the tourists are paying large fees, horses have a ready supply of oats to snack on.

But horses are no fools.  They also got the city to install several horse-sized drinking fountains around the city.  They didn’t settle for plain old metal or concrete troughs either.  No…they wanted something with class, fountains with running water.  None of that stagnant stuff for them.

And so, thanks to horses, we’re blessed with several beautiful drinking fountains, big enough for horses.  I realized, after walking by them a gazillion times, that I’d never drawn one.  I have rectified that omission and present the results here. 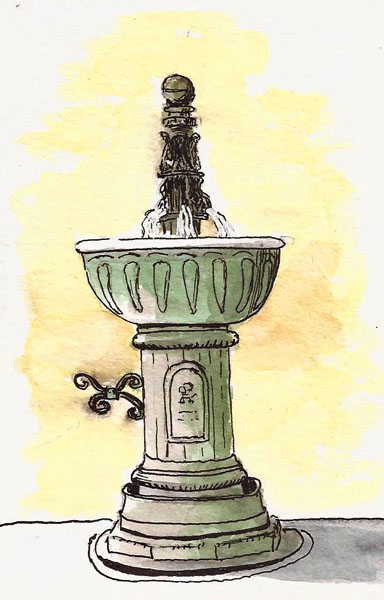 8 Responses to “Can’t a City Horse Get A Drink Around Here?”