It’s not often that a US company offers a product that’s a Canadian Exclusive but then Nathan Tardiff beats a different drum from most.  Love ’em or hate ’em, Noodler’s inks and pens are everywhere in our sketching world and that’s in large part because of Nathan’s approach to business. 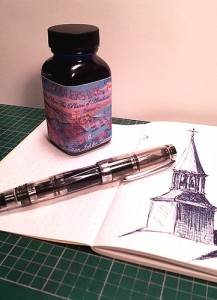 And it’s true that he’s produced a Canadian exclusive blue-black ink called Blue Upon the Plains of Abraham.  It’s a reference to a famous battle (1759) between the French and British for control over Quebec City.  I’ve talked about the Plains of Abraham here before as there is a lot to sketch there.  We held our last sketchcrawl there.

I’ve only had the ink for a few days soI can’t do an exhaustive review.  I bought mine from Wonder Pens, whose service was great and since they’re in Toronto, it didn’t take long for the ink to get to me.  Currently I have it in my TWSBI Mini and a Sailor fude pen as I take my first steps towards using the ink.

It’s a very dark blue.  So much so that you have to look closely to see that it’s not black.  But the blue component is just enough to give the results a special look.  The ink is one of Noodler’s “eternal inks”, meaning that it’s supposed to be “waterproof” but because these inks become waterproof by contact with cellulose, heavily-sized watercolor papers leave it susceptible to water.  The Plains of Abraham ink is better than most in this regard, ranking up with Lexington Gray in terms of waterproofiness (is that a word?).

Otherwise the ink performs well, though it seems to write a bit drier than many Noodler’s inks, more like Bernanke Blue & Black.  This can be a good or bad thing depending upon what you’re doing with it.  I’ll talk more about it as time goes on but for now, I’ll leave you with a sketch I did with it yesterday. 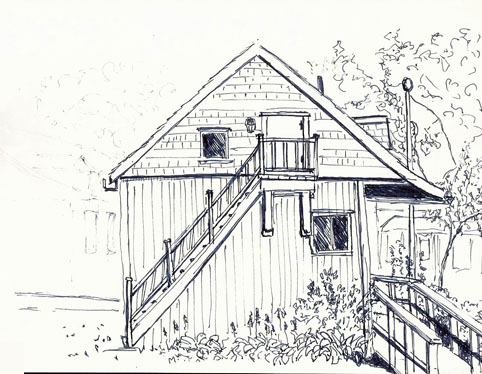