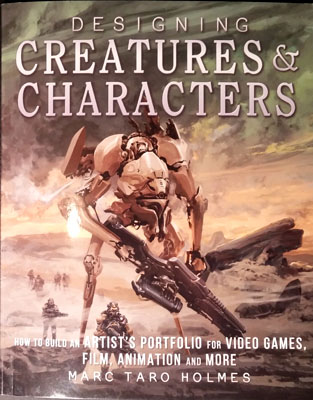 From the title of this post you might be wondering if I’ve gone mad.  You might be asking “What does Designing Creatures & Characters have to do with being a street sketcher in Quebec City?”  Truth is, I bought this book because of the words at the bottom of the cover, Marc Taro Holmes.  I’m a big fan.  I love his art and because he’s so giving of his time and expertise online, if he’d illustrate the Quebec phone book I’d buy one, and I never call anyone any more.

This book is about how to become a concept artist, working in an animation studio.  I know nothing of that world and I figured I’d get this book, flip through it, enjoy the pictures and put it on a shelf.  But I found myself reading it, cover-to-cover, gleaning little bits and bobs while learning how character development works in the minds of people with imagination.  Wish I had some (grin).

What I have to confess is that I’m not in a position to review this book.  It’s beautiful but beyond that, I’m out of my depth.  The book is divided into four sections: Ideation, Anatomy, Animation, and Illustration.  Each section presents information about its subject and then there are nine projects for the reader to accomplish.  It might be to develop a set of fishes inhabiting the sea in a video fishing game or development of a group of possibilities for a warlord character.  One project is the development of a crew of a pirate ship.

Each of the major sections builds on its predecessors and eventually you are at a point where you have fully-rendered characters, drawings showing detailed construction information, and drawings showing how the character moves and any special features of said character.  It’s all pretty cool. 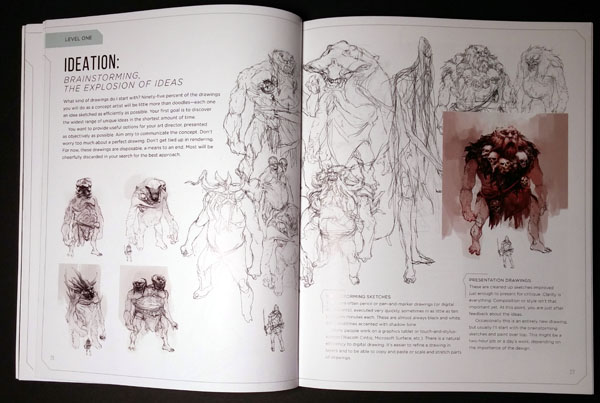 To be honest, I got the most from the Ideation section.  This section is closest to what I do.  It’s sketching and in this case, it’s sketching in the form of brainstorming ideas, dumping as many as you can on the page so they can be visualized and evaluated.  This was where I surprised myself because I found myself scribbling copies of some of those sketches and I had a ball doing them.  I even started adding stuff to those sketches, or removing things.  To be sure, I would have been laughed out of any concept director’s office but it was fun nevertheless. 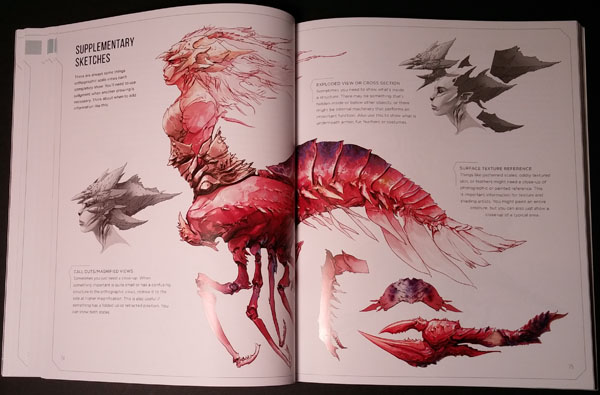 I’m not a fan of digital rendering as it all looks the same to me so when the book ventured further into a concept artist’s process, the book sort of lost me.  All I could do was look at the pictures because I have no idea how to digitally render a cube, let alone complex creatures.  I wish I could say more about this book but, quoting Clint Eastwood, “A man’s gotta know his limitations.”   What I can say is that IT’S A MARC TARO HOLMES BOOK and I love it.