This is the original cover of Heather Marie Adkins’ paranormal romance novel.  I first saw it discussed on Facebook, checked out the description and decided to give it a try. 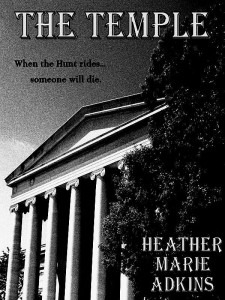 Vale Avari has a mysterious past and a laundry list of super-powers, but that’s nothing compared to what she finds upon moving from small town U.S.A to jolly-good England.

A chance dart throw lands her in Quicksilver, an off-the-map place with a big problem – people are dying, and word is, it’s supernatural.

At her new place of employment, a temple dedicated to the ancient Mother Goddess, Vale learns something even more shocking – women guards are disappearing at an alarmingly patterned rate; women who possess special gifts like her own.

Supernatural powers aside, Vale isn’t ready to believe in the Wild Hunt as the culprit, and she’s determined to prove the deaths are acts of human violence.

Plagued by a brute with a history of domestic violence and lusting after a dark-eyed man with a secret, Vale has a limited amount of time to discover the killer before he strikes again. In the process, she’ll learn things aren’t always what they seem and the supernatural might not be so extraordinary after all.

The Hunt could ride for her. This is the current cover of The Temple, drawn by Heather Adkins’ little sister, Sheridan.  What caught my eye in the description was that her main character, Vale, had super-powers.  In spite of my guy genes, (translation: I don’t read romances of any kind), I thoroughly enjoyed this book.  While there is some romance it definitely leans more towards a paranormal mystery.

I don’t know what Ms. Adkin’s plans are but this book could serve as the beginning of a series featuring Vale and some of her friends.  In any case, here’s the short review I wrote and posted on Amazon and GoodReads.

I don’t read romance novels. It’s a guy thing. But I picked up The Temple because of a discussion of the book elsewhere. The author’s imagination and ability to write wonderful descriptions combine to produce a story that, while there is romance, there is also adventure, a dose of fantasy and a splash of humor. I really enjoyed it.

2 Responses to “Book Highlight: The Temple by Heather Marie Adkins”