Quebec City is not an industrial town.  We have no massive factories except for our paper mill.  Rather, we have government…lots of government as we’re the capital of the province of Quebec.  And we have the oldest walled city in North America and cruise ships visit us regularly.  We do tourism.  And so we have lots of politicians and tourists.  We also have UbiSoft, the video game manufacturer so we have animators…story-tellers.  In short, no big factories to sketch.

But we are also a port and the largest building around that port is a huge grain elevator and ship loading facility along the northern side of our marina.  Lots of train cars and boats visit the place as grain is moved onto awaiting ships.  In short, it’s a big, intimidating building to sketch 🙂

I took it as something of a challenge and so became my sketch of the Bunge grain elevators. Done in a Stillman & Birn Zeta (5×8 x 2) sketchbook with a Pilot Prera and Platinum Carbon Black ink.  W&N watercolors give it a bit of color.  Click for a larger image. 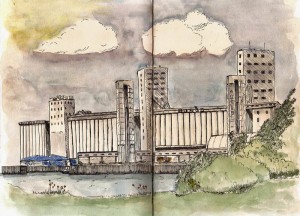