Tomorrow is April Fool’s Day but Quebec City is still waiting for spring.  It is the case that Mother Nature gave us clear skies today but, like my attitude toward politicians, I’ve taken a ‘fool me once…’ point of view of Ma-dam Nature.

And so as I wait for her to stop playing with my sensibilities, I’ve look for places and things to draw.  I’m not much of a people sketcher as they just don’t interest me very much but what’cha gonna do when the snow is falling and the temps are below freezing.  I quick-sketch people.  It’s fun but the results somewhat embarrassing (grin). 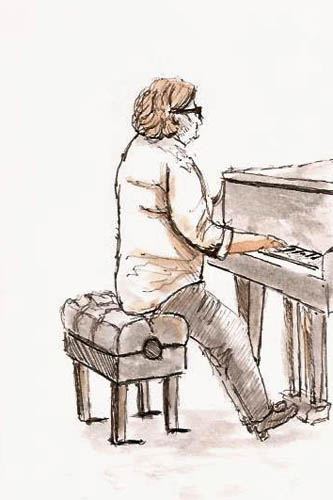 Here’s a couple sketches from a recital I attended recently.  They were done in a Strathmore ‘toned gray’ sketchbook with a Pilot Prera.  If there’s shading it was done with waterbrushes with a few drops of ink added to them.

The larger one was an attempt to capture audience and musician but time ran out and the cellist walked away before I was done so he and the cello remain unfinished.  Such is life of a real-time sketcher. 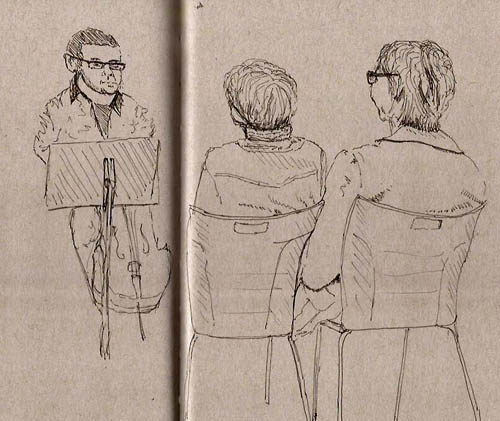 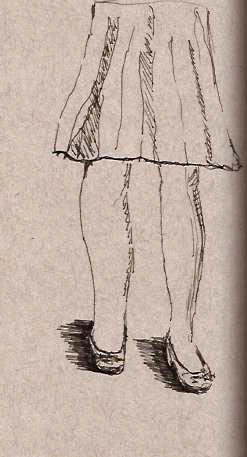 I include this tiny sketch because I thought it funny.  Not sure what I was thinking.  Well, actually I do.  These legs were attached to a trombone player and between her being short, the woman sitting in front of me being tall and her music stand, these legs were my only connection to the “action”, seen between two member of the audience.

A couple days later we were invited to a read-thru rehearsal for a play by the Quebec Art Company.  Yvan does the marketing posters for them.  I found this a near-impossible challenge as the actors were moving around on stage almost constantly and my people art ‘vocabulary’ is insufficient to draw people who are changing their positions every few seconds.  I took advantage of one guy who was supposed to be dead (spoiler alert – he wasn’t) and drew him but, as you can see, I resorted to drawing some of the props.  I did a fantastic chair but I won’t bore you with chair and sofa drawings (grin).   These were done in a Stillman & Birn Alpha (10×7) using Pilot Prera and Lexington Gray. 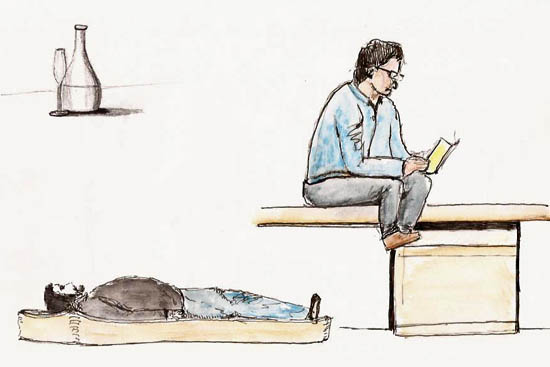 All in all, it’s all good.  The more I move pointy devices across paper, the better I get at it.  Working at different speeds is like cross-training and all speeds seem to benefit.  Still, I’m hoping spring comes “real soon.”