It’s been a week since I’ve posted but finally I have a good excuse.  All those other times I was just goofing off.  My brother and his lovely wife came to town.

This might not seem like much to those of you who actually get to see their families on a regular basis but for me, it was a special treat.  As much as I love Quebec City, it’s roughly 3000 miles from my “home”, which is (was?) in Arizona.  Most of my family still resides there and it’s been a very long time since I’ve seen my brother.  While I won’t waste your time with details of our visit, I thought I’d share a few of the snapshots I took as we wandered parts of Quebec City.

We started on the Plains of Abraham.  This is a very large park that used to be a farmer’s field, Mr. Abraham’s field to be precise.  But then the British climbed the cliffs, the French came out of the walled city.  They both brought guns.  Now, Mr. Abraham’s field commemorates the battle that saw the British take control of Quebec City.  Unless you’re a historian, all of the battles that preceded this 22 minute interaction, and the months of bombardment, are lost in the pages of history books. 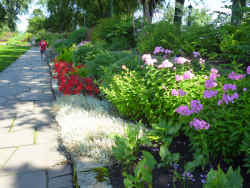 What is not lost is the beauty of the place.  Not only are there rolling hills and tall trees, there is an extraordinary garden, called…wait for it…the Battlefield Park Garden. 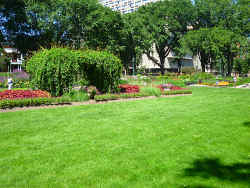 For reasons unknown to me, a statue of Jean d’Arc looks down upon it.  It’s a copper statue much like the Statue of Liberty so I’m guessing it was a gift from France at some point.  Ignorance am me. 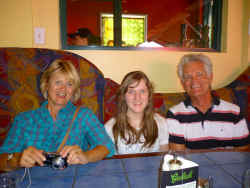 From there we headed to Rue Cartier, a wonderful street filled with small shops and restaurants.  We were foraging.  The photo is of my brother, his wife and my daughter.  They’re smiling because the food is on its way and hopeful that this will be the last time I have them pose for a photo.

After lunch we visited the Citadel. Quebec City is, or was a very strategic location, the walled city sits on a point, high above the St. Lawrence and this is the place where the Gulf of St. Lawrence shrinks down into what is to become the St. Lawrence Seaway.  This access point is very narrow and so anyone with a pop-gun could defend it against invading ships, which is one of the reasons it was so hard for the British to invade in the first place. 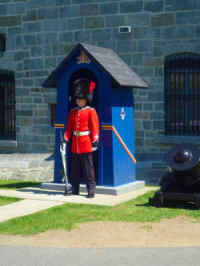 But invade they did and when those rebels in the US started shooting at Red Coats and dumping tea in Boston Harbor, the British in Canada got worried.  When those same infidels tried to invade Canada, they were even more convinced.  They used a French fort design and constructed a great fort to defend against American invasion. 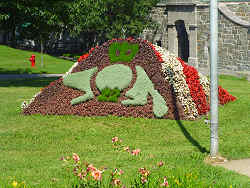 This fort is now the home of a French-Canadian regiment, the 22nd, which has a long and illustrious history.  The fort has never been attacked, at least not by a military.  Annually, however, tourists invade to tour the place, see the museum displays and to buy pieces of wood, plastic and paper.  These “souvenirs” are smuggled from the country, to rot in closests around the world.  It’s really amazing but very good for the Quebec economy.  Last weekend, we were part of the invasion force. 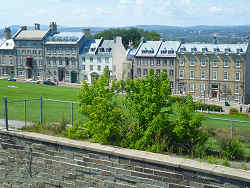 No visit to Quebec is complete without enjoying the fabulous architecture.  The “castle” as most call it is actually the Chateau Frontenac, a huge luxury hotel built long ago. 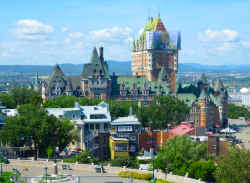 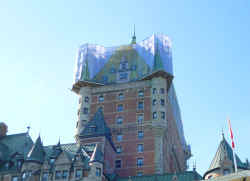 It’s currently having the upper roof replaced and not wanting the view disrupted too badly, they wrapped the area with large canvases painted to resemble the hotel behind them.  From a distance, it was surprisingly effective. 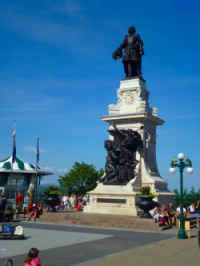 We saw statues…lots of statues.  This one is of Sam Champlain.  While French folks were living in the Quebec City area long before he showed up, he was an organizer… a doer.  He is considered the founder of the city so he gets a big statue. 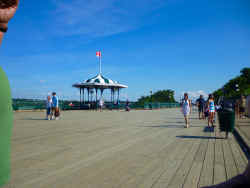 In front of the Chateau Frontenac is a long promenade that is absolutely delightful.  There are a number of reasons for this, not the least being that you can buy ice cream cones there.  I guess, though, that most people go there to look down on the St. Lawrence which is a couple hundred feet below.  It’s quite a sight. 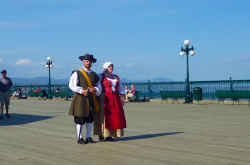 This is a photo of my wife and I, in our go-to-market clothes.  You’d think we could get dressed up to show family around but we’re a casual lot here in Quebec.

I’m sad to say that while we went other places, I seemed to run out of motivation to take photos so there are no more.  I’ll try to take others before the snow flies.