One of my favorite things about living in Quebec City are the Quebec Capitales games I attend.  Baseball and Quebec don’t seem natural, though when I looked into it there is a long history of Quebec baseball teams.  But kids here play soccer more than baseball.  And, for goodness sake, hockey is front page news, and followed with a passion that borders on the fanatical.  The provincial Premier has a hard time getting a word in edgewise during hockey season. 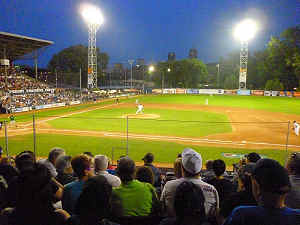 Nevertheless, Quebec has a thriving team – part of a CAN/AM pro baseball league.  While it may be a step down from the Toronto Blue Jays, the game experience is just as satisfying, maybe even more so.  The team ownership understands well that it is providing entertainment and it treats ticket buyers as though we are all friends and most certainly that we are valued.  Humor plays a big part and so foul balls that leave the stadium are followed by sound effects of glass breaking as though some car in the parking lot was taking part in the proceedings.

Kids are also a big deal to the Capitales and every game I’ve attended have short events for the kids between innings.  They also honor kids who are part of the small contingent of young baseball players in Quebec City. 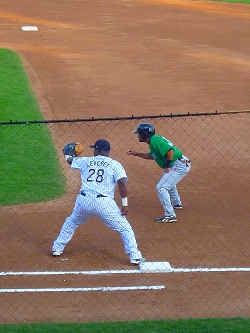 For me, as an American living in this French-speaking city, there are special feelings.  I sit, with 4000+ other people.  They all speak French, though crys of “bad call, ref” do crack the air on occasion.  The umpire calls balles and prises.  Home runs cause the announcer to yell a drawn out “CIRCUIT.” Vendors sell biere froide and players don’t have RBIs, they have PPs.  I still don’t know what PP stands for but does it really matter?

The French creates a different ambiance, though the rhythms of baseball seem the same the world over.  But the most striking thing comes during the 7th inning stretch, when all of these French souls stand, and reading from the big screen behind the 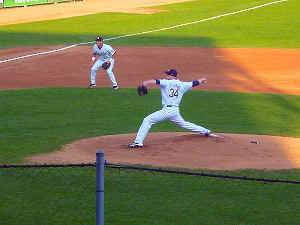 Oh…one last thing.  The Quebec Capitales, MY team, is in first place by a considerable margin.  At 26 and 18, they’re 5 games ahead of their nearest rival.  And that’s better than the Blue Jays.

One Response to “Baseball – Quebec Style”