I am Canadian, but unlike every other person living in the frozen north, I don’t like hockey.  I suppose that reveals my American roots but the bottom line is that the only sport I watch is baseball and since coming to Canada, I’ve been a Toronto Blue Jays fan.

It’s that time of the year when spring training starts and a few spring training games (in Dunedin, FL) are broadcast for those of us willing to watch, for the most part, Blue Jays wanna-bes play the game.

The first one was last Friday and I decided to celebrate the event by sketching some baseball faces.  Baseball is a slow sport; how hard could it be?  I learned that a sketcher’s view of baseball is different from a fan’s view.  Indeed, for a fan, the game is slow with lots of time spent watching seven guys stand on a field while two other guys play catch and a tenth guy, from the other team, tries to spoil their fun.  From the view of a sketcher however, this same scene is a frustrating series of camera switches between players, between views, and there’s rarely more than a few seconds on any one player.

I suppose it wouldn’t have been so bad if I’d wanted to draw full-body players.  The pitcher stands in one place and is on camera more than anyone else.  The catcher is equally stationary, at least in the sense of returning to the same position regularly.  But I was interested in drawing faces shaded by ball caps and 1) they are rarely shown and 2) they are rarely in repeatable positions.

Sketchers are tough, however, and I managed to get a few, stitching together brief looks at the player and faking it when necessary.  Here’s my meager tribute to Blue Jays spring training opener. 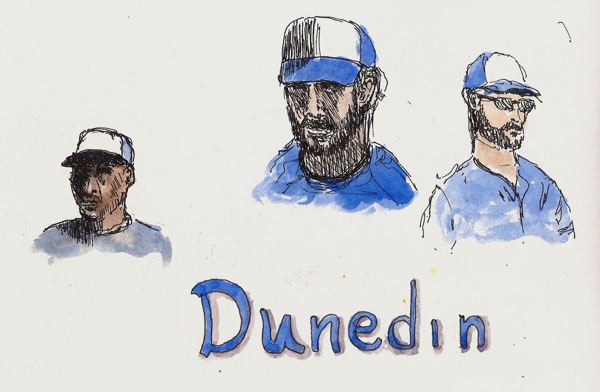