Alfred Pellan is well-known to the Quebec art crowd as a guy who produced surreal imagery, kinda-sorta Picasso-like (I’ll probably be stoned for saying so).  Born in Quebec City, he became closely associated with École des Beaux-Arts de Québec.  Like many Quebec artists, he also studied at  École nationale supérieure des Beaux-Arts in Paris.  He died in 1988.

There’s a bust in honor of him in the Jardin de St. Roch and I drew it.  I struggle with pencil shading.  I’m sure this is in no small part because I do it so rarely but to make matters worse I decided to try to do it with red pencil.  My buddy Yvan does it so smoothly so I know it’s not the tool, but the guy I see in the mirror every morning that is at fault.

Nevertheless, here is my attempt.  It was drawn on 8 1/2 x 11 Strathmore Bristol (vellum) using a 2mm lead holder and Turquoise red lead.  There was also a couple hours involved. 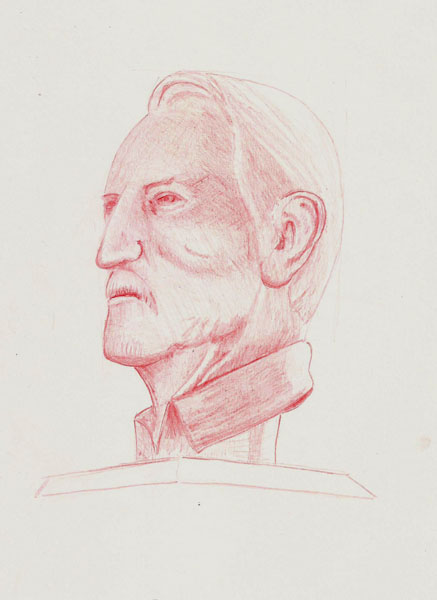