Just before I left for Ottawa our group went to an exhibit of Claude Simard’s work at the Centre d’interprétation historique de Sainte-Foy. This is a very large house on the grounds of a large church/cemetery.  The church is a stone building that was gutted by fire a while back and was renovated into a place for semi-outdoor (walls but no roof) theatre.  Anyways, the grounds of this building complex are very nice and very sketchable.

We spent some time sketching outdoors before going to the Simard exhibition and I drew this small building where they used to keep corpses in winter when the ground was too frozen for burials to take place.  I apologize for the “lines” in the color.  These were produced when I used a cheap gray marker to indicate locations of tone because I ran out of time and needed some guidance for later when I added color. 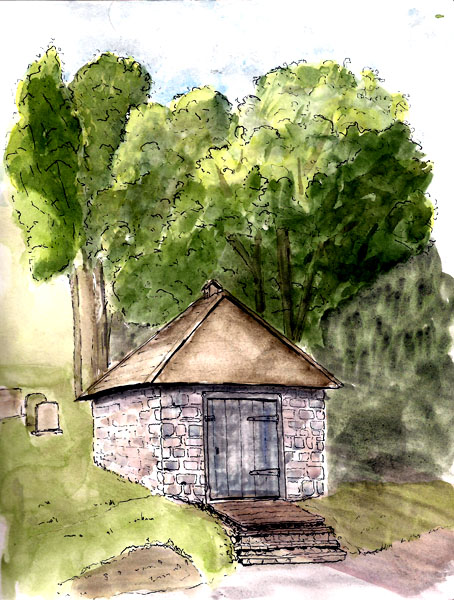 I really enjoyed Claude Simard’s work.  His paintings, mostly done in acrylic are bright, very colorful and impressionistic.  While it’s clear from sketches on display that he is an excellent draftsman, this is not reflected in his paintings, which are almost caricatures of their subjects.  Nevertheless, it’s clear where he got the moniker as the Happy Painter.

What excited me the most, however, were the cabinets that displayed some of his sketches.  Some were in sketchbooks while others were done on watercolor paper.  All were simple sketches with loose watercolors added to them.  I loved them all.  In fact, I started drawing some of them with the idea of playing with watercolors in as close as I could get to his style.  This was a lot of fun and I did several of them.  Here’s one example.  The original was about 5×7, as is my copy of it.  I’m afraid I fell short of doing his watercolors justice. 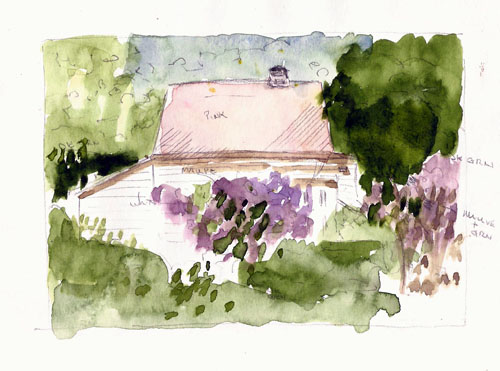 2 Responses to “A Visit With Claude Simard, Sort Of”