It’s been three days since I went out sketching with the gang.  It didn’t make it to 60F that day so, of course, as we headed out for a road trip to Berthier, Quebec the prediction was for temps in the mid-80s with a humidex pushed to over 90F.  Mr. Jetstream is oscillating like crazy these days.

This trip was timed perfectly as we would be sketching next to the St. Lawrence River, where there’s always a breeze to cool things down.  Claudette, Fernande, Yvan and I headed over the bridge with Fernande at the helm.  Once on the south shore we turned east along the river on our way to pick up Louise in St. Vallier, half an hour away. 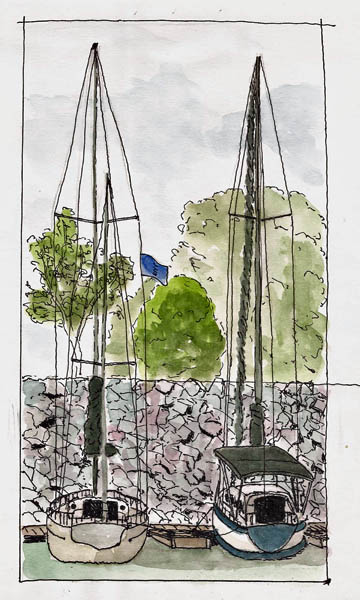 Berthier is just down the road from St. Vallier and I’d never been there before.  I’ll be going back ‘real soon’, though.  It’s a sketcher paradise.  There is a small marina with lots of sailboats to sketch.  There is a quay with benches so you can sit and sketch either passing boats or the other side of the St. Lawrence, which features Mount Tremblant.  There is a large park area with lots of picnic-partaking folks to draw.  There are rocks along the coastline and farm buildings if you look in the other direction.  And if that ain’t enough, there’s a place to get coffee and restrooms to cycle it.

The five of us headed for the marina to sketch boats.  I wanted to capture the height of the masts and  chose a scene and vertical format to emphasize their extraordinary height.  I probably worked too fast but that’s always the case when I’m with a group. 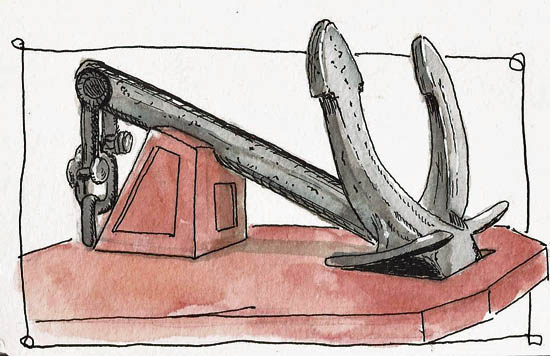 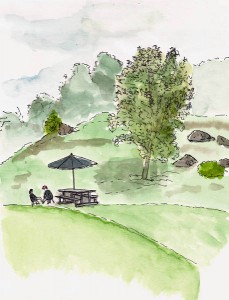 Once finished there we sketched a bit more, up in the park area and then set up at a table overlooking the marina for lunch.  We’d collaborated and brought cheeses, baguettes, grapes, and wine for lunch.  Claudette made some fantastic roasted peppers that were great along side cucumber slices.  We were living high.  I ate too much.

To be honest, by the time lunch was over I needed a siesta.  I sketched some but decided that a coffee might perk me up.  I think it did and I sketched some more but the sun and food had slowed me to a crawl.

Evidence of that is here.  I’d sat down on a bench looking out at the river.  It was thoroughly enjoyable but there wasn’t much to sketch except for a large ‘other side of the St. Lawrence’ sort of sketch and I didn’t have the energy for that.  But, in front of me, on the storm wall was a light, part of a series of them along the wall.  Behind, and well below them were rocks and the river.  So, I drew one light, drinking coffee and breathing in the fresh air.  I was thoroughly content with the day and this sketch was the final drip from my pen.

2 Responses to “A Summer’s Day At Berthier, Quebec”